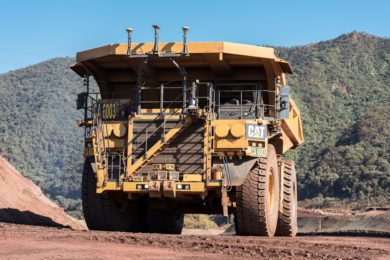 A fleet of seven new Caterpillar 240 ton (218 t) 793F CMD fully autonomous trucks is already running at Vale’s Brucutu iron ore mine in Minas Gerais and by 2019 there will be 13 in place. The trucks, controlled by computer systems, GPS, radars and artificial intelligence are managed using the Cat autonomous haulage system, Command for hauling, part of its MineStar™ suite of technology products.

The result of six years of research and testing, the seven trucks used to transport iron ore from the mining front to the processing plant began to be part of the daily operations alongside six other traditionally operated vehicles. When the entire fleet is replaced by trucks with the new technology, in early 2019, Brucutu will be the first mine to operate autonomously in Brazil.

“The use of this type of technology is increasing in the world market, not only in the mining area. The use of autonomous equipment will bring gains in productivity and competitiveness for Vale and the Brazilian industry,” says Lúcio Cavalli, Ferrous Planning and Development Director.

Vale added that people continue to play an important role in autonomous operation. The teams that monitor and control the entire process can be comfortably installed kilometres away from the operations. Brucutu’s equipment operators were moved to other functions in the mine itself or other Vale units in the region. Part of the team was used in the management and control of autonomous equipment, after having undergone training courses, which can last up to two years.

With greater use of autonomous equipment Vale also says it is likely to create more opportunities for highly qualified professionals in the technical and engineering areas of automation, robotics and information technology in the operational areas. “With less people present in mining activities, where there is movement of heavy vehicles and large volumes of cargo, the employees’ exposure to accident risks is reduced.”

The technology used in the trucks can identify obstacles and changes that were not foreseen in the path determined by the control centre. Upon detecting any risks, the equipment will shut down until the path is cleared again. The safety system is able to detect both larger objects such as large rocks and other trucks and also any people that are in the vicinity of the road.