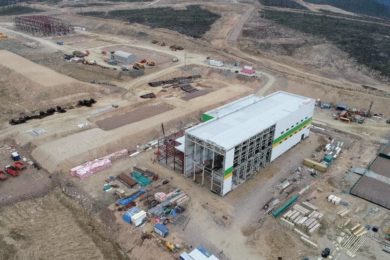 Nord Gold has formally launched its Gross gold mine in Yakutia, Russia, with the operation set to take the company beyond the 1 Moz/y production mark when fully ramped up.

The mine opening ceremony was launched during the Eastern Economic Forum, with company executives joined by Dmitry Kobylkin, the Minister of Natural Resources and Environment of the Russian Federation, and a number of other regional and national politicians.

Nikolai Zelenski, Nordgold CEO, said: “Gross is a significant new asset for Nordgold and turns us into a 1 Moz/y producer for the first time in our history. I believe we have firmly cemented Nordgold as a truly world-leading developer of new gold mine assets.

“This gives us even greater confidence as we look to develop our Montagne d’Or asset in French Guiana which is expected to be a major catalyst for much needed economic growth in the country.”

Gross is adjacent to the company’s Neryungri mine, which produced 67,400 oz of gold last year. It is a single open pit heap leach operation.

All Gross structures meet the technical and climatic requirements specific to the region. They are
earthquake-proof, as well as being designed to operate in Yakutia’s severe climate conditions, with
temperatures that can fall as low as -60ºC.

The mine’s heap leach pads are also designed to be resistant to seismic activity and frost. The geomembranes used are high quality and environmentally protective, meeting the highest international
standards, according to Nordgold.

A coal-fired 16 MWt power plant will ensure continuing operations of the mine even during winter.