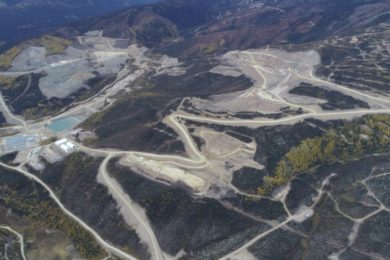 Toronto-listed Victoria Gold has provided a construction update for its Eagle gold project in the Yukon of Canada, and confirmed it is on schedule for first pour in the second half of 2019.

Overall engineering is now around 89% complete, with the remainder “not critical” to meet the operation’s schedule, the company said.

Eagle is expected to cost C$369 million ($288 million) to build and has the potential to produce around 200,000 oz/y from a mine operating at 33,700 t/d. The operation will produce doré from a conventional open-pit with a three-stage crushing plant, in-valley heap leach and CIL adsorption-desorption gold recovery plant.

Victoria Gold said total project commitments through the end of August 2017 were C$304 million with C$178 million of incurred cost. All major procurement packages were complete and large long lead items have been procured, materially reducing the risk of schedule delays for construction completion and first gold pour.

“Primary mobile mining equipment has been delivered to site. Both CAT 6040 front shovels and six of 11 CAT 785 haul trucks have been assembled and commissioned. The balance of the haul truck fleet is in active assembly with the remaining truck boxes currently on route to site,” the company said.

Major crushing equipment for the primary, secondary and tertiary crushers are all in transit with the majority of equipment now in country and continually being delivered to site, the company noted.

The overland conveyor and mobile conveying equipment for the coarse ore stockpile and heap leach facility are currently in manufacturing as are major components of the gold recovery plant.

The heap leach facility earthworks (including the embankment, pad area and event pond) are advancing well and currently slightly ahead of schedule. This has enabled an early start to liner placement on the heap leach pad, which began in early September with nearly 10,000 m² of the heap leach pad now covered, Victoria Gold said.