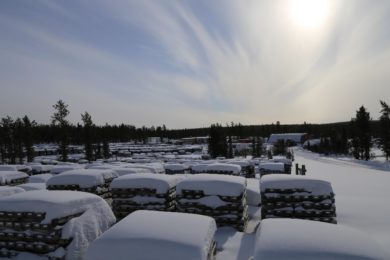 The prefeasibility study on Denison Mines’ Wheeler River uranium project, in the Athabasca Basin of Canada, has brought with it a significant change in the mining process for the high-grade Phoenix deposit.

Denison is now considering the use of in-situ recovery (ISR) mining at Phoenix, a lower cost method than the previously considered jet bore system, which requires freeze wall protection and is used at Cameco’s Cigar Lake mine.

The PFS envisages co-developing both the Phoenix and Grypon deposits using two different mining methods. The former would use ISR, with the latter using conventional long-hole underground mining.

Taken together, the project is estimated to produce 7.8 MIb/y of U3O8 over a 14-year mine life, with a base case pre-tax net present value (8% discount rate) of C$1.31 billion ($1.01 billion), and initial pre-production capital expenditures of C$322.5 million.

David Cates, President and CEO of Denison, said: “The selection of ISR mining for the high-grade Phoenix deposit is a defining moment for our company and a potentially transformational development for the future of uranium mining in the Athabasca Basin – bringing the world’s lowest cost uranium mining method to the jurisdiction hosting the world’s highest-grade uranium deposits.”

Denison said the selection of ISR mining at Phoenix came after considering 32 alternate mining methods to replace the high-cost jet bore mining system assumed for the Phoenix deposit in the 2016 preliminary economic assessment.

“The suitability of ISR mining for Phoenix has been confirmed by significant work completed in the field and laboratory – including drill hole injection, permeability, metallurgical leach, agitation, and column tests,” the company said.

Results demonstrated high rates of recovery in both extraction (+90%) and processing (98.5%) following a simplified flowsheet that precipitates uranium directly from the uranium bearing solution, without the added costs associated with ion exchange or solvent extraction circuits, Denison added.

“Given the unique geological setting of the Phoenix deposit, straddling the sub-Athabasca unconformity in permeable ground, the project development team has combined the use of existing and proven technologies from ISR mining, ground freezing, and horizontal directional drilling to create an innovative model for in-situ uranium extraction in the Athabasca Basin.

“While each of the technologies are well established, the combination of technologies results in a novel mining approach applicable only to deposits occurring in a similar geological setting to Phoenix – which now represents the first deposit identified for ISR mining in the Athabasca Basin.”