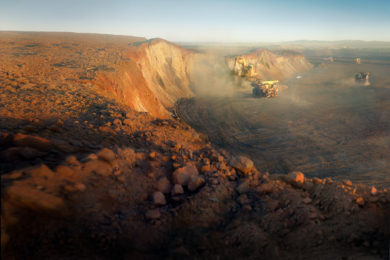 Komatsu Mining recently held a special media event at its Arizona Proving Grounds (AZPG) near Tucson, and gave a presentation specifically focussed on the history, current status and future plans for its FrontRunner® Autonomous Haulage System (AHS) technology and line-up. The company now has over 130 fully autonomous mining trucks running across seven operational sites (six are fully autonomous sites) – namely in the Suncor oil sands operations in Alberta, Codelco’s copper operations in Chile and across multiple Rio Tinto iron ore sites in Australia’s Pilbara – and the fleet still has a perfect safety record with no incidents. The 130 number is growing, and the fleet to date has moved over 2 billion tonnes. FrontRunner is now operating on Komatsu 830Es, 930Es and 980Es. The company states that the 400 ton 980E is the largest payload autonomous haul truck on the market.

The company emphasised that autonomous systems need to work in tight conjunction with optimised fleet management to realise maximum benefits. It also pointed out that it offers a full suite of autonomy options to the market, from assisted operations through active control, teleremote, to autonomous haulage. The current offering is impressive. At the fully autonomous end of the spectrum, the Komatsu AHS system already consists of the FrontRunner Central Control, which is the autonomous control system that integrates seamlessly with an industry leading DISPATCH Mine Management system and allows full control from one central location. The fleet offered as stated now includes three autonomous models, the 830E-AT, 930E-AT and 980E-AT, from 240 to 400 tons. The loading units are not yet automated (on the media day, a PC7000 manned hydraulic excavator was used) but Komatsu offers advanced loading units for single or double sided loading from hydraulic excavators to hydraulic shovels, large wheel loaders and electric rope shovels. Equipped Manual Vehicles below the main fleet include graders, dozers, water trucks and light vehicles equipped with FrontRunner EMV Kit for seamless integration.

All this is supported by a MasterLink 802.11 wireless network for high bandwidth and speed but the company is also increasingly looking at working with LTE networks for consistency and strength of signal with greater degrees of automation. There are many autonomous truck benefits, from reduction of risk from drowsy or unskilled drivers to taking personnel out of hazardous working areas to central control and working with a machine that offers 100% compliance and obeying of road rules. The machines also bring lower fuel usage, reduced carbon emissions and lower tyre disposal costs due to increased tyre life. They offer in precision and reliability superior navigation accuracy, precision placement of dumped loads, absolute control of material destination and consistent haul cycle times. Efficiency-wise they equate to a more planned and stable operation with reduced variability, increased operational utilisation and minimised stoppage for breaks. Komatsu has said in cost terms that the load and haul total unit cost for users of its AHS are reduced by up to 15% with a 13% reduction in total maintenance costs. With reduction of sudden acceleration and abrupt steering, Komatsu has estimated a 40% improvement in tyre life compared to manned operations.

FrontRunner autonomous haulage trucks can communicate using auto interaction which helps them navigate intersections, dump and load locations, while permission lines monitor speed while interacting with other AHTs. Manual vehicle interaction allows for interaction between AHTs and Equipped Manual Vehicles (EMVs) with three modes designed for different interactions: Travel, Passing and Park. A Collision Detection System (CDS) is an additional FrontRunner safety layer, consisting of digital safety envelopes surrounding EMVs and AHTs at all times, providing a warning when an AHT’s permission lines cross an EMVs safety envelope. When the Obstacle Detection System (ODS) detects an obstacle it automatically stops the AHT which are equipped with two ODS units at front and back for optimal coverage. An Emergency Stop Button can stop all AHTs in operation when activated. FrontRunner EMVs, AHTs and the Central Control have have this button.

At the Arizona Proving Grounds (AZPG) Komatsu has tested all new prototype trucks with an isolated 700 acre testing area for AHS operation and a modern workshop with room for future sized equipment.

The full autonomous mine will be next in the near term, featuring not only AHS trucks but also autonomous loading units and more advanced cabless trucks, namely the Innovative Autonomous Haulage Vehicle or IAHV which is under development at the Proving Grounds and which was originally shown off at MINExpo 2016. Not much more has been released on progress other than originally announced, however, IM understands that there are about two years of testing to complete – that includes testing of the equipment and technology both together and separately. Two years of testing have already been conducted so the development will have been over four years in total.

Komatsu developed this IAHV vehicle exclusively as an unmanned vehicle designed to maximise the advantages of unmanned operation. By distributing equal load to the four wheels both when the vehicle is loaded and unloaded, and adopting four-wheel drive, retarder and steering, Komatsu is aiming for high-performance shuttling of this vehicle in both forward and reverse travel directions, thereby totally eliminating the need for K-turns at loading and unloading sites. In particular, Komatsu expects that this new vehicle will considerably improve the productivity at mines where existing unmanned haulage vehicles face challenging conditions, such as slippery ground due to frequent rain/snowfall as well as confined spaces for loading.

Ultimately the plan of course is to have a mine running on artifical intelligence, where you can upload the mine plan to the equipment and the fleet will execute it autonomously, something Komatsu is fully committed to.