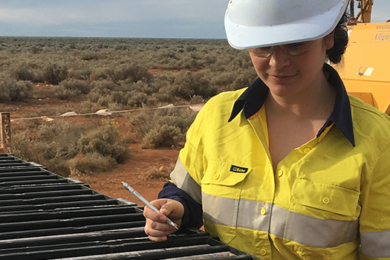 “What we continue to see in Australian resources exploration is a highly inefficient use of capital,” Hronsky said. “The availability of risk capital for exploration is volatile and sentiment driven. Our financing model strongly favours recycling of old, marginal to sub-economic mining and exploration projects rather than genuine greenfields exploration for new Tier 1 deposits,” he said.

“We need to move on a sooner rather than later basis to breakthroughs in undercover exploration to unlock what we believe is enormous potential to add to Australia’s rich mining history of minerals discovery, albeit at surface or shallow depth. This at a time of a continuing fall in greenfields share of exploration spending.

“Junior explorers offer flexibility but do not have access to adequate funding. They are financed mostly from the retail sector, which is strongly sentiment driven and short-term focused.”

Hronsky said major mining and exploration companies were not incentivised to prioritise genuine greenfields undertakings. “Majors have the funding but not the flexibility, and struggle with the nimbleness required for effective greenfields exploration outcomes,” he said. “There is also a misconception among many majors that junior explorers and miners will do the job for them.”

Hronsky pointed also to a strong need to upgrade the industry’s training protocols. “We train geoscientists at university but need explorationists in the industry,” he said. “Exploration skills need to be learnt and the current practice is ad hoc and largely on-the-job.

“There is the challenge of transferring the tacit knowledge of long-term experience to university students and graduates through progressive curriculums and greater use of simulated environments.”

Meanwhile, The Australian Academy of Science is proposing the development of a new ‘downward-looking telescope’ that could look at least 300 km beneath the Earth’s surface to unlock Australia’s hidden mineral wealth. The proposal is one of several in a ten-year plan for Australian Geoscience (2018-27) launched by the Academy’s National Committee for Earth Sciences.

The Committee’s Chair, Professor Sue O’Reilly AM FAA, said one of the challenges for Australian geoscience in the coming decade is to ensure the right infrastructure is in place to knowhow and where to explore for the critical resources needed for Australia’s future.

“This is where the downward-looking telescope comes in,” she said.  “A piece of infrastructure like this would transform our minerals sector by making deep Australia visible. It would give us a new understanding of the vertical makeup of the continent and allow us to direct our mineral exploration efforts in the two-thirds of Australia that aren’t currently cost-effective to explore.”

“By 2030 global demand for cobalt will be 47 times what it was in 2016 so, unless we can become self-sufficient in this strategic metal, Australia may be held to ransom with massive price increases and chronic shortages,” Professor O’Reilly said. “This exemplifies the need to generate new geoscience knowledge that will allow us to explore successfully in the covered areas of Australia.”

The plan also calls for an expansion of Australia’s national computational capability to ensure that Australia retains and extends its lead in geoscience simulation and modelling capability.

In an opening address in Adelaide this morning to the AGC convention, Geoscience Australia Chief Executive, Dr James Johnson, said geoscience was providing immense value to society, from the economic benefits of resource development through to GPS positioning, underpinned by the science of geodesy.

“It is important that we, as geoscientists, act as ambassadors for our science, to raise awareness of the general public on how geoscience benefits society. Even Earth observations from space are becoming increasingly important in monitoring environmental change and in natural resource management,” Johnson said.

He noted it would become increasingly important for Australia to manage its groundwater resources on a more sustainable basis.

“We exist in a global environment where surface water only represents 0.3% of the Earth’s fresh water while groundwater represents just over 30%,” Dr Johnson said. “As Australia is the driest inhabited continent on Earth, it is logical that an increased focus on how we research and manage both our onshore and offshore water resources will play an increased future role in how Australia develops its natural resources inventory.”

He also stated that marine geoscientific research will be important to Australia’s future. “Australia has the third largest Exclusive Economic Zone in the world, yet we know very little about our marine environment,” Johnson said.

“Increased seabed mapping will help us to better understand marine habitats, fisheries, ocean circulation patterns, underwater geohazards and tsunamis, and much, much more,” he said.

This week’s Australia Geoscience Council Convention is being attended by more than 1,000 delegates and is the pivot point in Australia for Earth Science Week 2018.