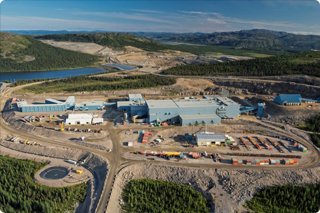 Cobalt 27 Capital Corp has received confirmation from Vale of the start of the Voisey’s Bay transition to underground mining with the first blast at the Reid Brook portal rock face of the Voisey’s Bay Mine Expansion (VBME), located in Newfoundland & Labrador, Canada.

“Congratulations to the Vale team on this important milestone. The blast, which was ahead of schedule, is the first of thousands that will take place over the life of the project, and is a key milestone marking the commencement of underground construction of the Voisey’s Bay Mine Expansion, which is expected to be an important source of cobalt outside of the DRC. Construction activities on the Voisey’s Bay underground mine are now focused on starting the underground development on all four declines with significant initial construction planned through to the end of 2018 into early 2019.” commented Anthony Milewski, Chairman and CEO, Cobalt 27.

On June 28, 2018, Cobalt 27 announced that the company had closed its acquisition of a $300 million cobalt stream on Vale’s Voisey’s Bay Mine including from the planned VBME. The company’s 32.6% Cobalt Stream is expected to deliver approximately 1.9 Mlb/y of cobalt to Cobalt 27, to be settled in physical delivery for the life of the mine, commencing January 1, 2021. Vale announced its plans to proceed with the construction of the VBME on June 11, 2018, and is expected to have its first full year of production in 2021. Total estimated capital expenditures to complete construction and commissioning of the VBME are estimated by Vale to be bout $1.7 billion. Vale expects with VBME to extend Voisey’s Bay’s mine life to 2034.