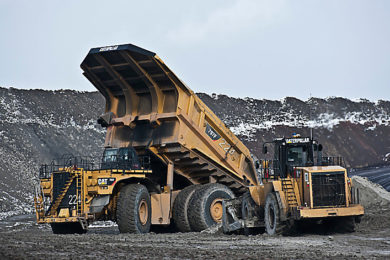 In the age of big data, it is refreshing to see OEMs still using in-the-flesh simulations of equipment and components to verify new and improved products.

That is exactly what Caterpillar is doing at its Technical Centre R&D facility in Peoria, Illinois.

IM toured the facility on Monday and discovered a dedication to testing anything from single components to entire drivetrain systems in the harshest of mine site conditions one can imagine.

Cat is making the most of digitalisation and big data throughout the group – its renowned MineStar system is leading the way in fleet management, machine guidance, equipment and personnel tracking, and equipment health – but it is also cognisant of the need to provide the conservative mining industry with in-the-flesh simulations.

At the R&D facility in Peoria, the company is not testing out concepts – of which the company has many (some 15,000 patents and counting).

The company spends some 4% of annual sales and revenue on R&D and, by the time tests are carried out in this facility, analytical models have already identified potential new products or improvements to existing products.

This is where the integration of digitalisation and in-the-flesh simulation align nicely; the latter taking its lead off the former.

The role of the Peoria facility is to verify equipment/components can perform as expected, thereby laying the groundwork for further in-the-field testing at one of the company’s three proving grounds.

One of the simulations IM witnessed on Monday was the testing of an entire drivetrain from the 363 t 797F mining truck.

Here, the company can replicate a 24-hour cycle by modifying certain inputs to give the drivetrain the impression it is, for example, operating on a 30° incline.

The drivetrain can be plugged into more than 100 feedback channels to gain an accurate picture of what impact this operating scenario has on the machine.

This 797F test has been in place for more than 15 years, but the company and its customers are still after still want such feedback before buying one of these expensive machines.

There are also a series of other tests available at the facility where systems and components can be put through their paces at temperatures as low as 40°C and altitudes as high as 12,000 feet (3,658 m).

While there are digital models within the company built to do exactly this, the reality is the results do not yet match up.