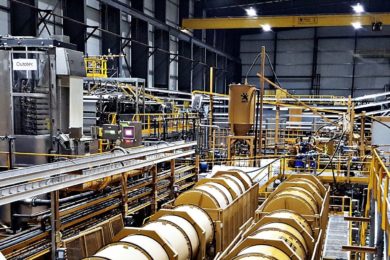 TMAC, the owner operator of the Hope Bay high grade gold operation in Nunavut, began the process of ramping up the processing plant in June 2018 when the second concentrator line began commissioning. The company has managed a steady increase in throughput, including 1,385 t per day on average for the third quarter, and the plant has now exceeded expectations for the pace of ramp up with an average of 1,900 t/d being processed in October. The October performance has been achieved in a month where there has been extensive construction activity in the plant related to the installation of additional gravity concentrators and substantial related upgrades and reconfiguration.

The processing plant is equipped with two 1,000 t/d Gekko Python lines (pre-concentrator lines) containing secondary crushing, grinding, flotation and gravity gold recovery equipment. The pythons are fed by a primary jaw crusher. A concentrate treatment plant (CTP) then processes the gravity and flotation products. TMAC says it is completing the installation of additional gravity concentrators in the plant. Two FLSmidth Knelson XD20s have been installed to capture fine gravity recoverable gold in the concentrate treatment side of the plant (the CTP) regrind circuit. Their installation included the reconfiguration of the inline pressure jigs and spinners to the CTP in recirculation with the screening circuit, with those changes completed by the end of October.

The successful Sepro Falcon SB400s in each of the concentrator lines are being upgraded to Falcon SB1350s, which are being installed in November. The Falcon SB1350s will enable the plant to treat the entire flow within the primary grinding circuit, rather than solely the recirculating load. Two Falcon C2000s, which are expected to scavenge gravity recoverable gold and sulphides from the cyclone overflow feeding the flotation cells thereby further reducing losses to tailings, are expected to be online by the end of November. The surge bins for each of the concentrator lines, currently in fabrication, will be installed before the end of the year to add further stability to plant operations; this is the last significant planned modification. TMAC maintains its expectation that recoveries of at least 90% will be achieved by the end of the year with the completion of these plant modifications.