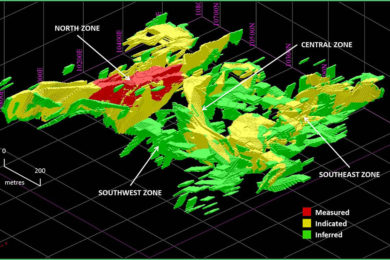 Northern Territory Chief Minister Michael Gunner said Arafura Resources decision to build a separation plant for its Nolans rare earth project in the Territory was a significant vote of investor confidence in the NT. This follows a record year for mineral production in the Territory – A$4.49 billion in 2017/18, up 24% on the previous year, which was a record at A$3.63 billion.

Arafura Resources has been determining the feasibility of locating the plant for its Nolans project in either the Northern Territory or South Korea for a number of years. Originally, the preferred site was an industrial estate in South Korea.

The Northern Territory Government has been working with Arafura throughout 2018 to secure the plant for the Territory.

Arafura has advised the Australian Stock Exchange that it will be locating its separation plant at its Nolans mine site approximately 135 km north of Alice Springs. The company is expected to spend around $80 million building the plant, to potentially begin in late 2019, creating an additional 30 ongoing jobs within the separation plant and boosting the company’s operational workforce for the Nolans project to around 370.

The Separation Plant represents to the Territory an:

The NT Government has recently established a new Local Jobs Fund to create more local jobs immediately. Significant job creating projects, which are advanced in their development like the Nolans project is, may be able to seek finance through the Fund.

Minister for Primary Industry and Resources, Ken Vowles, said “Mining is an economic strength of the Territory. With this announcement, the Territory is showing it can also deliver local value-added processing to our mineral resources.

“At a proposed output of 3.600 t/y of neodymium/praseodymium oxide, this equates to an amount of material sufficient to produce approximately 2 million electric vehicles for over 30 years.

“Our engagement with customers indicates a growing focus on the provenance of rare earth supply being sustainable and managed in an environmentally and socially responsible manner. Building the Separation Plant at the project site in the Territory allows us to tick those boxes.

Arafura’s mineral tenure over the Nolans project site is secured by three granted exploration licences (ELs) – EL28473, EL28498 and EL29509. Arafura has also applied for four mineral leases (MLs) within these ELs which, when granted, will host the mining and mineral processing operations, and many of the associated infrastructure elements of the Nolans project.

The project’s cornerstone asset is the Nolans Bore rare earths-phosphate deposit, one of the largest and most intensively explored deposits of its kind in the world. The deposit contains a JORC 2012-compliant Mineral Resources of 56 Mt at an average grade of 2.6% total rare earth oxides (TREO) that extends to 215 m below the surface. Two-thirds of the contained rare earths are in high confidence Measured and Indicated resources.

The most abundant rare earth-bearing minerals at Nolans Bore are apatite, monazite (both phosphate minerals) and allanite (a silicate mineral). These mineral species present a highly desirable rare earth mix at Nolans Bore, with 26.4% of the mix represented by NdPr.

The Measured and Indicated resources base has the potential to support mining and processing operations for at least 30-35 years, at a design capacity of 14,000 t of TREO equivalent per annum.

Open-pit mining will selectively target phosphate-rich material types which comprise more than two-thirds of the deposit’s Measured and Indicated resource inventory. Arafura is planning to mine up to 5 Mt each year to produce 650,000 t of run-of-mine ore as feed to a three-stage crushing circuit.

Crushed ore will initially be processed in a beneficiation plant that employs whole-of-ore flotation as the main unit operation. Beneficiation reduces the mass for subsequent processing by around 50%.

The flotation concentrate will be pumped approximately 8 km via a slurry pipeline to an extraction plant.

The former product will be further refined at the separation plant into three final products for sale: NdPr oxide, lanthanum (La) oxide, and a mixed middle-heavy rare earth (SEG-HRE) carbonate. Annual production is estimated to be 3,600 t of NdPr oxide, 2,660 t of La oxide and 660 t of SEG-HRE concentrate.

Solid rare earth-bearing products from pre-leach will then be subjected to several processes at the extraction plant that involve baking, water leach, precipitation, dissolution, and purification. Output from the extraction plant will be 16,450 t/y of a NdPr-rich rare earth chloride intermediate product, and a lower value cerium (Ce) oxide product.

Resources for the Nolans Bore deposit as at June 2017 using a 1% TREO cutoff grade.