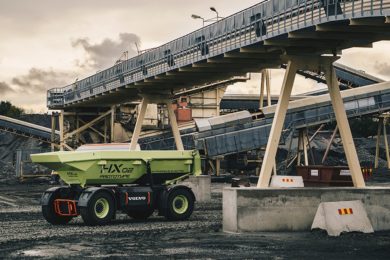 Since the end of August, Volvo CE and its customer Skanska have been testing the viability of the Electric Site research project at Skanska’s Vikan Kross quarry, near Gothenburg, Sweden, which is being visited by IM this week, and will be the subject of a special report in our January 2019 issue. The project is testing the world’s first ‘emission-free’ quarry and aims to transform the quarry and aggregates industry. It involves electrifying each transport stage in a quarry – from excavation to primary crushing, and transport to secondary crushing – and aims to reduce carbon emissions by up to 95% and total cost of operations by up to 25%. The system incorporates electric and autonomous prototype Volvo CE machines: eight HX2 autonomous, battery-electric load carriers, a 70t dual-powered, cable-connected EX1 excavator and the LX1 electric hybrid wheel loader.

The prototypes at the Electric Site are part of ‘Volvo Concept Lab’. This is a Volvo Group initiative that is designed to showcase innovative concepts, ideas and research and development projects that meet customers’ future needs. At this stage, the machines and technology involved in the electric site solution are part of a research project and are still not yet commercially available.

As well as new machines, it also involves new work methods and site management systems which together, form a complete site solution. New technology encompasses machine and fleet control systems and logistic solutions for electric machines in quarries. The system’s efficiency, safety and environmental benefits are huge and are set to impact both customers and society at large. At this stage, the machines and technology involved in the electric site solution are part of a research project and are not commercially available. “The electrification of construction equipment will
produce cleaner, quieter and more efficient machines – this represents the future of our industry,” says Melker Jernberg, President, Volvo Construction Equipment. “Skanska has high ambition when it comes to achieving a climate neutral construction industry. But we cannot do this alone. Partnerships like the Electric Site are the way forward,” says Anders Rehnström Executive Vice President Skanska Sweden and President Skanska Industrial Solutions.

Eight prototype HX2 autonomous, battery-electric load carriers are part of the electric site solution. The prototypes use a lithium ion battery to power two electric motors which drive the machine. The hydraulics are driven by an additional electric motor. The HX2 is a second-generation concept machine, which incorporates shared technologies and components from the Volvo Group. The machine is fitted with a vision system, which allows it to detect humans and obstacles in its vicinity. It can follow an adjustable, pre-programed GPS path.

The LX1 is Volvo CE’s prototype electric hybrid wheel loader. The machine can deliver up to a 50% improvement in fuel efficiency, as well as significant reductions in emissions and noise pollution compared to its conventional counterparts. The LX1 is a series hybrid that incorporates a driveline that consists of electric drive motors mounted at the wheels, electric-driven hydraulics, an energy storage system, a significantly smaller diesel engine and new machine architecture, including a new design of the lifting unit. It’s this combination that enables the substantial gain in fuel efficiency. The prototype – which has 98% new parts and a fundamentally new machine design – can do the work of a wheel loader that’s one size larger.

The EX1 is a 70-ton dual-powered, cable-connected excavator prototype. The base machine for the 70 t EX1 is a Volvo EC750 crawler excavator that has been upgraded to incorporate an electric
motor in addition to the diesel engine. When it’s plugged into the grid, the EX1 is a zero-emission excavator. If the cable is connected, the machine will automatically start in electric mode. If it’s not, it will start in diesel mode. The EX1 is operated in exactly the same way as a conventional Volvo excavator.

The machines being used as a part of Volvo Construction Equipment’s electric site research project are controlled by a site management system called Site Assist. Site Assist has three main functions. Firstly, it controls the overall operation at the Electric Site. This involves, for example, choosing which automated machines should be active and what the different machines should do.
Secondly, Site Assist provides insight into production KPIs, such as how much material is being produced. Lastly, the system acts as the integration point of data between all the various units and systems being used on site. Together, these functions enable Site Assist to coordinate the operations.
The Site Assist system consists of several subsystems with different purposes. One subsystem is the user interface, which the site operator uses to decide which production steps of the site should be active. The user interface is also used to visualise site information, enabling the site operator to run the site in the best possible way. Other important subsystems are the fleet and traffic control modules. The fleet and traffic control modules ensure that the machines are doing the right things in the right spot, and that they maintain sufficient distance from one another throughout the different work steps. This helps to ensure safety on site. Finally, there are also subsystems in the different machines. One such subsystem is Co-Pilot, which is used in the excavator and wheel loader to send and receive information about the site production, and command the automated haulers to move to desired locations. Thanks to Site Assist, the autonomous machines can share information with one another (eg where they want the others to be) and work together as a fleet. This enables continuous extraction of gravel from the quarry pit, which results in more efficient
equipment flow, improved cost efficiency and time savings on site.
“The Site Assist system we’ve developed, which is partly based on Co-Pilot, enables the machines to work together as a fleet, loading, unloading and charging in a cyclical fashion,” says Johan Sjöberg, system owner for site management and automation for Volvo CE. “It is one of the most important pieces in the complete system. It plays a central role in ensuring that the goals we have on site are fulfilled.” 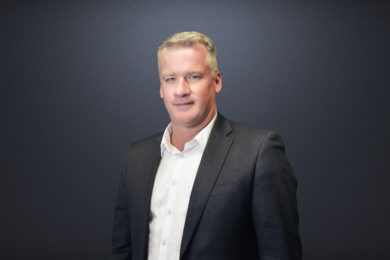 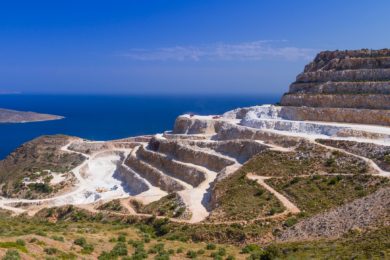 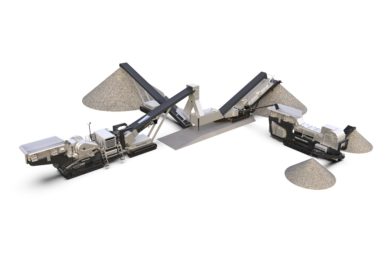