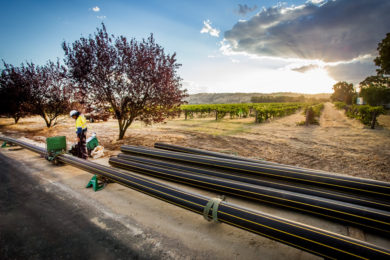 APA Group has executed an agreement to extend and expand gas services to an existing customer in the Goldfields region of Western Australia.

Under this agreement, gas will travel over 1,200 km across the energy infrastructure business’ West Coast Grid.

The expansion contract is expected to generate some A$45 million ($32 million) of revenue, of which A$21 million is renewal revenues, over the five-year agreement period, starting in November.

APA said the contract is the most significant of three it has entered into to support the expansion of the Murrin Murrin Lateral, a transmission pipeline located in south Western Australia that is 84 km in length and has a capacity of 45.6 TJ/d. It connects the Goldfields Gas Pipeline to the Eastern Goldfields Pipeline, which then connects to the Sunrise Dam, Tropicana and Granny Smith gold mines in the Eastern Goldfields region of Western Australia.