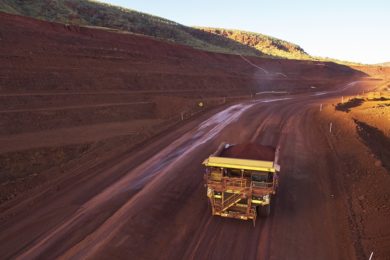 Fortescue Metals Group has now seen 35 manned haul trucks converted to autonomous mode at its Christmas Creek operations in the Pilbara of Western Australia, with Caterpillar recently completing a Command for hauling installation on a Komatsu 930 E, according to the iron ore miner.

The company shared the news ahead of an investor and media tour of the company’s operations this week.

During the tour, attendees will take in details of the company’s new 60.1% Fe product, West Pilbara Fines, in addition to viewing the innovative relocatable conveyor that started operating earlier this year.

Visitors can also expect to see first-hand Fortescue’s roll out of autonomous haulage technology. This includes a global first where Cat Command for hauling, part of Caterpillar’s MineStar technology offering first used on a commercial scale at Fortescue’s Solomon Hub operation, has been retrofitted on a CAT 789D and a Komatsu 930E haul truck.

Chief Executive Officer Elizabeth Gaines said: “Fortescue has led the way globally in embracing automation at our operations. The 789D is the 35th manned truck to be converted to autonomous at Christmas Creek, demonstrating our progress to becoming the only iron ore operation in the world to have a fully autonomous haulage fleet.”

Gaines said the tour will also see the company discuss Fortescue’s new energy agenda, including the integration of renewable energy and its recently announced landmark partnership with CSIRO to commercialise hydrogen technology.