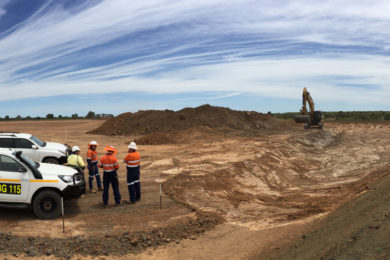 Adani Mining has managed to get together the financing needed to develop its massive Carmichael coal mine and rail project in Queensland, Australia, after parent company, the Adani Group, said 100% of the funds would come through its own resources.

The announcement follows recent changes to simplify construction and reduce the initial capital requirements for Carmichael, which is expected to produce some 27.5 Mt/y of high-quality thermal coal once fully ramped up.

Adani Mining CEO Lucas Dow said construction and operation of the mine will now begin.

“Our work in recent months has culminated in Adani Group’s approval of the revised project plan that de-risks the initial stage of the Carmichael mine and rail project by adopting a narrow-gauge rail solution combined with a reduced ramp up volume for the mine,” Dow said.

“This means we’ve minimised our execution risk and initial capital outlay. The sharpening of the mine plan has kept operating costs to a minimum and ensures the project remains within the first quartile of the global cost curve. All coal produced in the initial ramp up phase will be consumed by the Adani Group’s captive requirements.

“We will now begin developing a smaller open-cut mine comparable to many other Queensland coal mines and will ramp up production over time to 27.5 Mt/y,” he said.

The construction for the shorter narrow-gauge rail line will also begin to match the production schedule, he added.

The company has already invested $3.3 billion in Adani’s Australian businesses, according to Dow. “[This] is a clear demonstration of our capacity to deliver a financing solution for the revised scope of the mine and rail project.

Carmichael is expected to deliver more than 1,500 direct jobs on the mine and rail projects during the initial ramp-up and construction phase, and will support thousands more indirect jobs, all of which will benefit regional Queensland communities, Adani said.

Preparatory works at the mine site are imminent and Adani Mining is working with regulators to finalise the remaining required management plans, ahead of coal production, some of which have been subject to two years of state and federal government review.

“This process is expected to be complete and provided by the governments in the next few weeks,” Adani said.

“We have worked tirelessly to clear the required hurdles,” he said. “Given we meet the same environmental standards and operate under the same regulations as other miners, we expect that Adani Mining will be treated no differently than any other Queensland mining company.”

Located more than 300 km west of the Queensland coast, the Carmichael thermal coal mine and rail project will transport coal from the Galilee Basin to countries in Asia, including India, Vietnam and China.

In addition to the number of jobs and tax revenues Carmichael will create, the mine will also open the north Galilee Basin for further development, according to Tania Constable, Chief Executive Officer of the Minerals Council of Australia.

“[This is] an exciting new phase in Australia’s rich history of mining exploration and development, which has made our nation a global mining powerhouse,” she said.