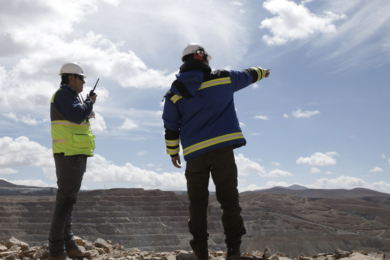 Teck Resources has approved construction of the Quebrada Blanca Phase 2 copper project in the Tarapacá Region of northern Chile after Sumitomo Metal Mining (SMM) and Sumitomo Corporation agreed to help fund the development in return for a 30% indirect interest.

The transaction with SMM and Sumitomo Corp will see the two companies pay $1.2 billion for a 30% interest in Compañia Minera Teck Quebrada Blanca SA (QBSA), which owns the QB2 project. This will be comprised of an $800 million earn-in contribution and a $400 million matching contribution. On top of this $50 million will be paid to Teck upon QB2 achieving an optimised target mill throughput of 154,000 t/d by December 31, 2025, subject to adjustment.

Don Lindsay, President and CEO of Teck, said QB2 was one of the world’s premier undeveloped copper assets, with this transaction further confirming the value of the project.

“This partnership significantly de-risks Teck’s investment in the project, enhances our project economics and preserves our ability to continue to return capital to shareholders and reduce bonds currently outstanding.”

The mine is expected to use “demonstrated industry-leading technology to enhance safety, productivity and sustainability, including an integrated operations centre located in Santiago, autonomous haulage fleet, and the first large-scale use of desalinated seawater in the Tarapacá Region to eliminate freshwater use in operations”, Teck said.

The company added that it was positioned for project construction with a strong and experienced execution team in place, major permits in hand, engineering nearly 80% complete, and contracting and procurement well advanced.

Lindsay said: “QB2 will be a long life, low-cost operation with major expansion potential, including the option to double production or more, to become a top-five global copper producer.”

This expansion potential is expected to be shown off with the completion of a scoping study to assess QB3 development options.

The social and environmental impact assessment for the QB2 project was approved in August and early field work commenced in September.

The project scope includes the construction of a 143,000 t/d concentrator and related facilities, which are connected to a new port and desalination plant by 165 km concentrate and desalinated water pipelines.

Teck has agreed with SMM and SC to cover their share of the cost of power under the existing power purchase agreements in excess of QBSA’s needs until the earlier of the startup of the first grinding line in the mill or September 30, 2022. The target date for project completion and the start of commissioning and ramp up is the December quarter of 2021. Full production is expected in the middle of 2022.

The project will build on the existing Quebrada Blanca copper mine, which produced 23,000 t of copper last year and is expected to stop producing cathode in mid-2019 as the supergene deposit is exhausted.

After the transaction is completed, the ownership of QBSA will be as follows: 60% Teck, 30% SMM/SC, 10% Enami.