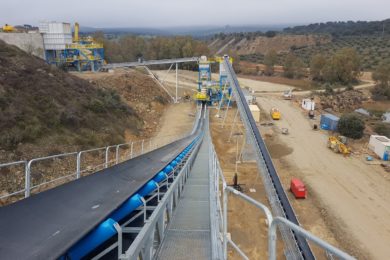 W Resources has confirmed the mechanical completion of the La Parrilla crusher plant, paving the way for commissioning of mined ore from the tungsten-tin deposit in western Spain next month.

The crushing circuit, supplied by Metso Minerals’ Portugal division, has been engineered to minimise creation of tungsten fines and is designed to process 350 t/h of ore, W said. It is made up of a C130 jaw crusher and secondary cone crusher, both with vibrating grizzlies prior to size reduction, and two tertiary cone crushers in closed circuit with a double deck banana screen.

This milestone follows delivery of the majority of the plant in September.

“The circuit has been designed for modular expansion to 700 t/h, requiring no modifications to the installed infrastructure in the future, and is currently configured to feed X-ray ore sorting going forwards,” W said. “The high level of automation in the design and robust wear liner packages will permit strong operational control and minimise maintenance requirements going forwards.”

Michael Masterman, Chairman of W Resources, said: “The crusher is the first of the three La Parrilla plants to be completed and it’s a great credit to the team to complete it ahead of schedule and on budget.

“We are looking forward to first mined ore into the crusher early in the new year which will contribute to an increase in production rates from La Parrilla in line with the planned ramp-up programme.”