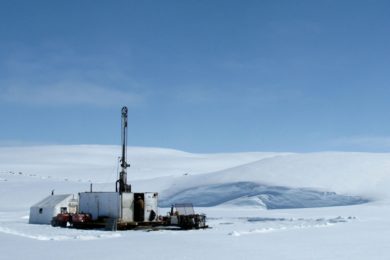 De Beers Canada, having successfully “winterised” the conventional power solution at its mines in northern Canada, is now looking at a 100% renewable electricity solution for its recently-acquired Chidliak diamond project, CEO Kim Truter told attendees at the Energy and Mines World Congress in Toronto this week.

While the Chidliak project is located on Baffin Island, which runs 100% on diesel power, Truter said due to the extreme remoteness of the proposed operation, “the energy solution for Chidliak has to be different”. The company acquired the mine earlier this year after taking over Peregrine Diamonds.

The hidden cost that comes with diesel power generation is the required supply chain infrastructure, ie roads, according to Truter. If Chidliak was a non-road supplied site, it would drive the need for renewable power, he said.

Another consideration is the size of Chidliak’s orebodies. As these are small, there is a need for a smaller overall footprint and the movability of plant as the bodies become mined out, he said.

So far, 51 kimberlites have been tested for the presence of diamonds at Chidliak, with 41 of these showing positive results. Two kimberlites, CH-6 and CH-7, were prioritised for advanced exploration and were tested for grade and diamond value.

At the conference, Truter said renewable supplementation of diesel baseload was growing in the industrial sector, but a micro-grid to regulate and accurately feed power through to a 100% renewable power system “does not appear to exist”.

Yet, the Princess Elisabeth Base in Antarctica is occupied 365 days per year and is powered by 100% renewable sources, he said.

“The next step is an Arctic mine with continuous (renewable) operations,” he told delegates, adding that the Chidliak development can achieve maximum potential if a 100% renewable energy solution is realised.

In order to achieve this, he laid out several solutions.

First, the company needed to look to shrink its footprint at Chidliak – size, people, power, thermal and environmental – then partner with best-in-class companies to tap into available natural energy sources; whether that be solar, wind or geothermal sources. Following this, De Beers Canada needed to confront the challenge of multiple-day power fluctuations with energy storage solutions and, finally, find an appropriate business model for the power solution.

In addition to retaining the company’s social licence to operate, Truter said the eco-credibility that came with using renewable energy was an additional motivator for De Beers Canada, bringing intangible value to its product.

De Beers Group has a global commitment by 2020 to reduce its energy requirements by 8% and cut its carbon emissions by 9%.