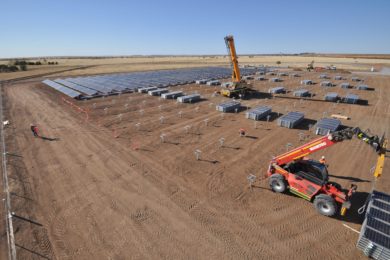 The new 7,200-panel solar farm at South32’s Cannington silver-lead mine in northwest Queensland, Australia, is up and running, the mining company confirmed.

The 6 ha, 3 MW installation is the company’s first solar installation and will help to deliver reduced greenhouse gas emissions by offsetting gas consumption with solar. Construction commenced in May.

“Electricity generated from the farm will be used to supply the operation’s accommodation village and airport with surplus power used to support mining and processing operations,” South32 said.

The project – which contributes to the objectives of the company’s Climate Change Strategy – is the second largest solar installation in a remote, off-grid mining operation in Australia and the first to be integrated into a gas-fired power station, according to the company.

Earlier this year, EDL Energy signed a 14-year extension of its contract to supply electricity for Cannington, which included partnering with SunSHIFT, a wholly-owned subsidiary of engineering and construction firm Laing O’Rourke, to ‘hybridise’ the existing 34 MW gas plant at the site, with this 3 MW solar photovoltaic installation.

It is anticipated the new solar farm will prevent between 4,000-6,000 t/y of greenhouse gas emissions.

Rob Jackson, Vice President Operations at Cannington, said the operation was committed to identifying energy efficiency initiatives. “Reducing greenhouse gas emissions is a big part of that so I’m delighted that our Cannington operation’s solar installation is leading the way,” he said.

The cost to install and operate the solar farm will be offset by lower fuel costs, according to South32. This makes it an economically viable solution for the operation.