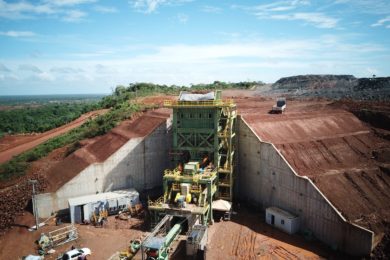 Equinox Gold reports that the new primary jaw crusher at its Aurizona Gold Mine in Brazil has been energised and dry tested with the expectation of putting first ore through the system in early January 2019. The project is nearly complete and on schedule to achieve commercial production around the end of Q1-2019. The mining contractor at the operation is U&M Mineração e Construção S/A (U&M) and the EPCM contractor is Ausenco Engineering Canada.

The ROM ore is trucked from the open pits and dumped directly into the ROM surge bin with 700 mm spacing bars, or stockpiled on the ROM storage pad and then reclaimed by a FEL to the surge bin. Any ore coarser than 700 mm is broken down by a mobile breaker. The ore in the surge bin is reclaimed by the 1,500 mm wide by 9 m long apron feeder. The ROM ore is fed onto the vibrating grizzly feeder, where the screen oversize coarser than 115 mm is directed to the jaw crusher, which crushes the screen oversize to a P80 of approximately 150 mm. The crushed ore reports to the surge bin feed conveyor which also receives the vibrating screen undersize. The combined crushed ore and the screen undersize will be conveyed to the SAG mill feed surge bin.
Project update summary:

The construction team is focused on piping, electrical and instrumentation. The main transmission line is ready to provide full energization to all equipment, and site-wide distribution circuits to local electrical rooms are being commissioned to enable testing of individual equipment components.

Equinox Gold commenced full-scale construction at Aurizona in January 2018 and pre-production mining in April 2018. Approximately $116 million was spent at the end of November 30, 2018, including fiscal 2017 spending related to construction activities. The project remains fully funded. In addition to existing cash reserves, the company has $10 million remaining to draw against its $85 million construction credit facility.