Para and Clark Construction partner up at Gold Road in Arizona 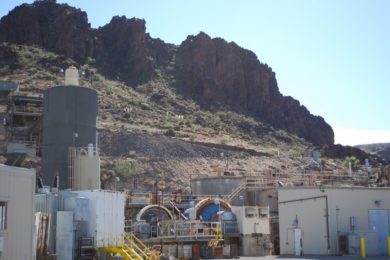 Para Resources has entered into a final services agreement with Clark Construction Group, whereby Clark will provide contract mining services at the company-owned Gold Road mine in Arizona, US.

The contract transitions from the original “time and materials” pact announced in November with an open book target pricing contract. This new contract establishes the basis on which mining and extraction will occur at the Gold Road mine, Para said.

Clark has already been present on the project with equipment and crews and Atkinson is currently driving an exhaust drift in preparations of installing an exhaust fan to upgrade the ventilation system, upgrading the main decline to accommodate larger trucks rehabilitating the secondary escape routes and remediating the previously announced ground control issues.

In addition, maintenance, testing, repair, and general clean-up of the mill has been completed, Para said. The mill is now in functional condition with the exception of additional ball mill liners and first fills which are expected later in January.

Mineralised rock production is on schedule and expected to commence in late January with the re-commissioning of the plant. First gold pour is anticipated in February 2019.

Geoff Hampson, Para’s CEO, said: “We are very pleased to have now transitioned our relationship with Clark Construction Group to a Target Price contract which will ensure continuity of costs and production. We have implemented several key bonus programmes to ensure that Para’s and Clarks’ interests and incentives are in sync.

“Clark is one of the most experienced and respected building and civil construction firms in the US and they bring extensive experience and knowledge to our operations and capacity. The partnership between Clark and our highly skilled and tested Para team will ensure a smooth and successful production ramp up.”

In August 2017, Para, through its 88%-owned subsidiary Gold Road Mining, acquired the 500 t/d carbon-in-leach/carbon-in-pulp Gold Road mine and mill, including patented claims and a mill and processing facility, located in the historic Oatman Mining District of north-western Arizona.

In other news, Para said the mill at the company’s El Limon mine in Colombia continues to perform as anticipated, with the ramp up of feed continuing.

“Para is now assisting several of the larger formalised artisanal miners with equipment, technology and management. The new winch and the new tailing disposal site at El Limon are expected to be completed by the end of Q1 (March quarter) 2019,” it said.

“The current ramp up at El Limon is anticipated to move the operation into positive cash flow in the coming months and commercial production is expected to be declared by the end of the March quarter.”