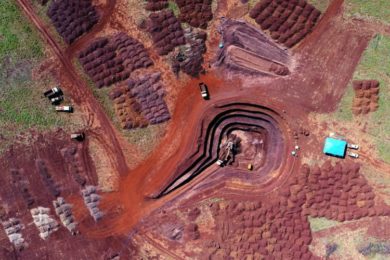 Horizonte Minerals has been awarded the construction licence for the development of its 100%-owned Araguaia ferronickel project in Brazil.

The award of the licence, called Licença de Instalação (LI) in Portuguese, was granted by SEMAS, the Brazilian Pará State Environmental Agency. It allows the London- and Toronto-listed company to construct the rotary kiln electric furnace (RKEF), processing plant and associated infrastructure, the company said.

Receipt of the permit follows release of the feasibility study (FS) in October 2018. This study envisaged a $443 million project able to produce an average of 14,500 t/y of contained nickel, within some 52,000 t of ferronickel. It also showed the potential for a doubling of production capacity to 29,000 t/y.

Jeremy Martin, CEO of Horizonte, said: “I am very pleased to announce the award of the LI for Araguaia as this is a major milestone for the company. Subject to funding, the company is now in a position to commence construction with the necessary environmental permits approved, including water abstraction permits issued in 2018 together with the newly issued LI.

“The LI award follows on closely from the completion of the FS, demonstrating that Araguaia is a Tier 1 asset with the potential to be a low-cost supplier of nickel in the form of high-grade ferronickel to the stainless-steel industry. Over the initial 28-year mine life, Araguaia is expected to generate cash flows after taxation of $1.6 billion and sits on the lower half of the global cost curve.”

Araguaia is in the southeast of the Brazilian state of Pará, some 760 km south of the state capital Belém. The project comprises an open-pit nickel laterite mining operation that mines 27.5 Mt of reserves over the mine life. The metallurgical process comprises a single line RKEF to extract ferronickel from the laterite ore.

The RKEF plant and project infrastructure will be constructed over a 31-month period. After an initial ramp-up period, the plant is expected to reach full capacity of approximately 900,000 t/y of dry ore feed.