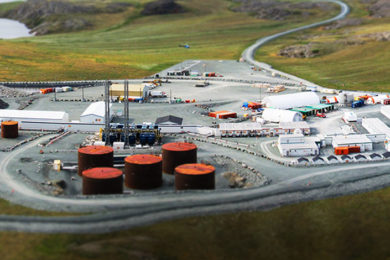 TMAC Resources has received approval of two Type A Water licences for the Madrid and Boston projects, part of its wider plans on the Hope Bay belt in Nunavut, Canada.

On January 14, the Minister of Intergovernmental and Northern Affairs and Internal Trade approved the two licences as recommended by the Nunavut Water Board (NWB) on December 7. This approval concludes the final step in the environmental permitting process and enables mine construction and operations and sets the closure bonding requirements, TMAC said.

Jason Neal, President and Chief Executive Officer of TMAC, said: “Receipt of these two water licences completes permitting for the Madrid and Boston projects and provides substantial development flexibility to TMAC. While 2018 has largely been about ongoing ramp up and implementing significant improvements to the Doris operations, in 2019, we balance optimisation of established operations with the initial steps of broader development of the Hope Bay Belt. We are looking forward to initiating development at Madrid North with the potential for first ore to the Doris plant and the commencement of underground development.”

In combination, the licences allow for the development and operation of three new gold mines at Madrid North, Madrid South and Boston, including a 55 km all-weather road connecting all four mines on the Hope Bay property.

The amended licence provides for the expansion of the existing Doris camp, expansion of the tailings impoundment area from 2.5 Mt to 18 Mt for Madrid tailings and the construction and operation of mines at Madrid North and Madrid South.

The company said: “The new licence for Boston provides development alternatives beyond our established plans, permitting the construction and operation of a fully independent mine site including a new 5.1 Mt facility and ore processing plant, allowing TMAC flexibility to evaluate options for what we expect will be a growing ore resource as we begin investing in exploration at Boston.”

Accomplishing this final step in permitting allows for the development scenario described in the 2015 prefeasibility study while significantly increasing water use thresholds for daily production and processing rates, according to TMAC. This study envisaged average annual gold production of 160,000 oz over a 20-year mine life, compared with the 33,100 oz record production posted in the most recent September quarter.

TMAC added: “The permitting strategy has also secured permissions to operate alternative wind power generation, expansion of TMAC’s port and includes surface mining of crown pillars at Madrid and Boston, similar to what is being executed at the Doris mine.”