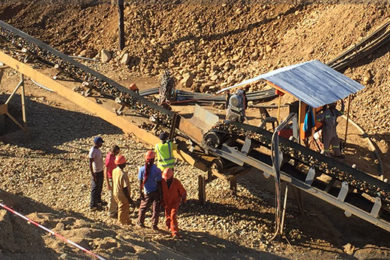 The agreement with the formerly named Sino Minerals Investment will last for a period of 10 years or the depletion of alluvials, with the option to extend for a further period of five years, if the alluvials have not depleted.

It includes performance targets whereby the contract miner, from February 1, will be required to have two fully operational plants with a minimum throughput of 200 t/d on a consistent, 24 h/d basis.

Xtract says the agreement is subject to the condition precedent that the contractor pays a total entry fee of $350,000 to Explorator. An initial $150,000 is to be paid on or before the date signing of the agreement, with the remainder recovered through future alluvial gold production.

In consideration for the appointment of the mining contractor, Explorator will initially pay the contractor a net fee of 72% of gold it produces, and Explorator will therefore initially retain 28% of the sales value of all gold produced (equivalent to 22% after payment by Explorator of the applicable Mining Production Tax of 6%). This will continue until the fee has been settled in full.

Thereafter, Explorator will pay the contractor a fee of 74% of gold it produces.

Colin Bird, Xtract Executive Chairman, said: “A number of contractors have expressed interest in mining the other areas of the alluvials in the Manica concession. Huafei Gold Resources was chosen because of their willingness to pay an upfront payment and demonstrated consistency of operation with their existing contract. They provided extra equipment into the concession and we look forward to increased production over the coming months and on completion of the rainy season.”