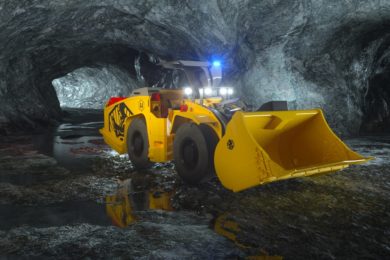 Based in Camarillo, California, US, Artisan is a manufacturer of battery-powered underground mining equipment. It has three commercially-available machines: a 4-t capacity LHD (A4, pictured), 10-t capacity LHD (A10) and a 40-t capacity haul truck (Z40).

The core technology behind Artisan’s offering is battery packs, electric motors, power electronics, software and control systems, according to Sandvik. “Artisan’s underground mining loaders and trucks are designed with these high-powered, highly reliable and field proven battery electric powertrains,” the company said, adding that Artisan is the market leader with most battery-electric vehicles currently operating in underground mining.

Lars Engström, President, Sandvik Mining and Rock Technology, said: “I am pleased to see the strategic acquisition of Artisan so soon after the opening of Sandvik’s state-of-the-art battery electrification innovation and development centre in Turku, Finland, in 2018. It is in line with our ambition to be leading in the market for battery-electric vehicle solutions.”

Artisan will be a business unit in the Load and Haul Division within Sandvik Mining and Rock Technology, the company said.

Mats Eriksson, President Load and Haul Division, Sandvik Mining and Rock Technology, said: “The area in which Artisan is located is a frontrunner in electric vehicle development. Our new R&D foothold there will complement the skillset we have in Finland. The combination of knowhow and skills creates a very strong platform.”

Prior to this acquisition, Sandvik had just one battery-powered underground machine, it’s DD422iE jumbo drill.

Artisan is a start-up company which, in 2017, had revenues of $12.3 million and approximately 60 employees.

The parties have agreed not to disclose the purchase price, but the transaction is expected to close during the March quarter. The deal is initially neutral to earnings per share, Sandvik said.