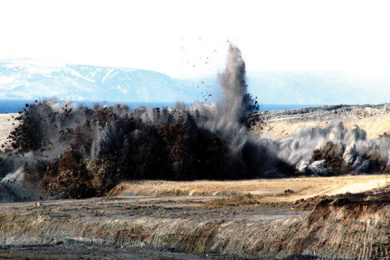 The two physical sensitisation materials tested, which are based on glass and polystyrene materials, confirmed detonation efficiency and will be utilised in 2019 field trials in both surface and underground applications. This latest development “will ensure the stability of the blasting formula specifically for on-site manufacture reducing the risk, cost and security associated with the transport and storage of explosives.”

In excess of seventy detonation tests were conducted over five days in high temperature field conditions at Rurex’s Byrock detonation range. The testing concludes phase one of the Physical Sensitiser Project.. The six-month investigation and collaboration with material suppliers worked to identify and manufacture the new sensitiser materials and ensure their efficiency.

“We have a renewed confidence in the robustness and performance of alternative explosives, superseding chemical gassing techniques”, states Dr Kettle. “We also had the opportunity to manufacture prototype cartridges for packaging the explosive, in preparation for underground mine-site trials proposed for 2019.”

The 1 m cartridges, maintain a barrier between the product and reactive rock surfaces whilst improving safety and loading of the explosive. Blast hole liners, another product packaging option, have recently been used in surface mining trials.