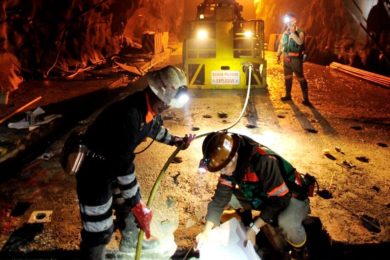 The transition to underground mining at the massive Grasberg operation in Indonesia continues apace, despite the major ownership changes that have seen PT Inalum’s and PT Indonesia’s collective share ownership of PT-FI total 51.24% and Freeport-McMoRan (FCX’s) share ownership fall to 48.76%. But the arrangements provide for FCX and the other pre-transaction PT-FI shareholders to retain the economics of the revenue and cost sharing arrangements under the Joint Venture. As a result, FCX’s economic interest in PT-FI, including its share of PT-FI’s net income, is expected to approximate 81.28% through 2022.

PT-FI is currently mining the final phase of the Grasberg open pit and expects to transition to the Grasberg Block Cave (GBC) underground mine in the first half of 2019. PT-FI continues to advance several projects in the Grasberg minerals district related to the development of its large-scale, long-lived, high-grade underground ore bodies. In aggregate, these underground ore bodies are expected to produce large-scale quantities of copper and gold following the transition from the Grasberg open pit. PT-FI’s estimated annual capital spending on underground mine development projects is expected to average $0.7 billion per year over the next four years, net of scheduled contributions from PT Inalum.

Substantial progress has been made to prepare for the transition to mining of the GBC underground mine. First undercut blasting occurred in September 2018, first drawbell blasting occurred in December 2018 and cave production is scheduled for the first half of 2019. All underground mining levels and the ore flow system are being commissioned. Production rates over the next five years are expected to ramp up to 130,000 t of ore per day.

During third-quarter 2018, PT-FI commenced hydraulic fracturing activities to manage rock stresses and pre-condition the Deep Mill Level Zone (DMLZ) underground mine for large-scale production following mining induced seismic activity experienced in 2017 and 2018. Results to date have been effective in managing rock stresses and pre-conditioning the cave. PT-FI expects to commence the ramp-up of production in the DMLZ underground mine by mid-2019 and to reach full production rates of 80,000 t per day in 2022. Estimates of timing of future production continue to be reviewed and may be modified as additional information becomes available.