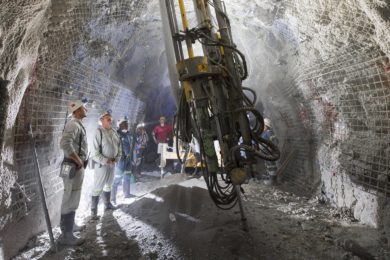 The Cullinan diamond mine, in South Africa, led the way in Petra Diamonds’ first half fiscal year 2019 results, with run of mine (ROM) from the underground block cave up 30% year-on-year to 785,444 ct.

Cullinan’s ROM diamond production increased 30% to 785,444 ct, due to a 12% increase in ROM treated to almost 2 Mt, as well as a 16% increase in the ROM grade to 39.3 ct/ht. This increase in volume and grade was due to the continued ramp up of production from the C-Cut phase 1 and a reduction in ore mined from old areas with higher waste dilution, the company said.

The third and final underground crusher was commissioned during December, delivering increased operational flexibility as mining progresses across the footprint of the cave, the company added. The new Cullinan plant is fully operational and meeting design parameters while normal optimisation is ongoing.

The C-Cut phase 1 project is planned to contribute around 3 Mt this year, with a further 700,000 t to 1 Mt sourced predominantly from the CC1E mining area, as well as from other B Block tonnes. Steady state production of 4 Mt/y will be delivered from C-Cut phase 1 and CC1E from FY 2020 onwards, according to the company. At the same time as this, the ROM grade at Cullinan is expected to remain in the 38-42 ct/ht range from FY 2019 onwards. The company’s current mine plan has a life to 2030, but the major residual resources at the mine indicate that the actual LOM could extend beyond 2030.

Meanwhile, at the company’s Finsch mine (South Africa), ROM carat production was flat at 927,934 ct in the company’s first half. A planned winder upgrade was successfully completed during the period, which necessitated a planned shutdown from December 21 to January 4. Overall, Finsch production decreased by 9% to 947,424 ct due to the planned reduction in tailings production.

Koffiefontein’s (South Africa) ROM production in the half remained flat at 25,275 ct as the company was negatively impacted during the period from community unrest relating to municipal service delivery, operational challenges experienced relating to plant availability and a lower than planned grade recovered. Since the start of January, additional crushing capacity has been introduced to the plant, employee attendance has normalised and monthly production is expected to ramp up.

Williamson’s (Tanzania) diamond production increased 23% to 214,421 ct, mainly due to an 18% increase in the ROM grade recovered as well as a 4% increase in tonnes treated to 2.7 Mt. Petra said it remained in discussions with the Government of Tanzania and local advisers in relation to the overdue VAT receivables and a blocked diamond parcel.