FLSmidth to move into ROL copper demonstration mode in 2019 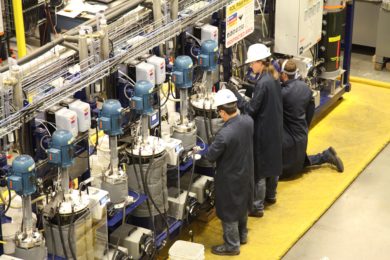 FLSmidth has provided an update on its Rapid Oxidative Leach (ROL) technology at the same time as reporting a boost in revenue and profit for 2018.

Within the annual report, the company provided an update on its ROL technology, a process it first announced the discovery of in May 2015.

“This groundbreaking solution overcomes three major challenges in the mining industry (copper in particular); declining ore grades, increasing levels of arsenic and other impurities, and reduced production from existing solvent extraction and electrowinning facilities due to falling recoveries from heap leach when transitioning from oxide to sulphide ores,” the company said.

FLSmidth said it was currently testing concentrates from several interested copper miners at its pilot plant in Salt Lake City, US (pictured), and at a third-party independent laboratory.

“The purpose of these tests is to establish data for the customers to determine if they would like to move ahead with prefeasibility studies,” FLSmidth explained.

During 2017-2018, the concentrates from one customer were tested and indicated a positive return on investment. “We have agreed with this customer to supply equipment and operate a demonstration-scale ROL process plant at their facility in South America,” FLSmidth said, adding, “this is an important step in scaling up and commercialising the ROL process”.

In addition to copper, the company has tested ROL with refractory gold and it has proven possible to apply the technology in the laboratory to significantly improve gold recovery, it said.

“We are currently working with several gold producers in research and development of this process, with the goal of potentially moving on to pilot scale testing in 2019,” the company concluded.