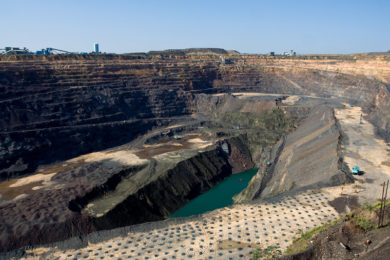 Basil Read Mining Botswana (BRMB), a wholly owned subsidiary of Basil Read Mining, has entered into an agreement with Thiess Botswana and Bothakga Burrow Botswana (BBB) to sell its 28% interest in the Majwe Mining joint venture to the two firms.

The joint venture dates to 2011 when entered into a pact with Leighton Botswana (later named Thiess Botswana) and BBB to bid for, and if successful, carry out the surface mining works project at Debswana’s Jwaneng diamond mine (pictured) Cut 8 contract mining project. On being awarded the contract in May 2011, the MMJV was incorporated.

In 2017, Debswana issued an expression of interest for the mining works project for the next stage of the Jwaneng mine development, known as the Cut 9 contract mining project. Majwe JV responded to this and was subsequently invited to submit a tender bid in February 2018.

Basil Read said the negotiations are still ongoing and at an advanced stage, with the project expected to commence this year.

The company said: “BRMB’s participation in the Cut 9 project would mean that BRMB continues being restricted from competing in Botswana as an independent entity, and thus limit its ability to unlock capital by growing and expanding its current business in Botswana.

“Participation in the Cut 9 project also requires the provision of both parent company and on-demand financial guarantees, further adding onerous obligations on BRMB. A call made on the guarantees would offset any returns from the project.

“Moreover, the shareholders of Majwe JV have been engaged in negotiations to increase the local citizen economic empowerment levels from the current 12% held by BBB up to 30% as per the tender requirement for the Cut 9 project. This will result in BRMB’s shareholding being diluted significantly.”

The company concluded: “Thus, the Basil Read group is of the view that the Majwe JV shareholding is a non-core asset. In our view, the required capital outlay can be used far more beneficially by funding the required plant and equipment replacements to pursue other opportunities for our mining business both in Botswana and elsewhere.”