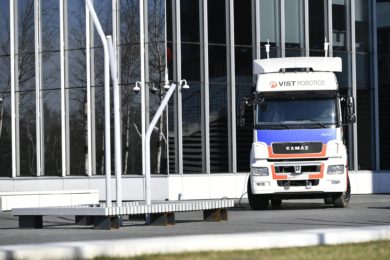 As part of the project, a five-wheel tow truck, a KAMAZ 5490 Neo, will be equipped with computer vision systems to allow it to detect and autonomously manoeuvre around obstacles such as people, animals, traffic barriers and cones.

Comparing the two autonomous applications, VIST said: “The implementation of the Kamaz autonomous truck is planned to take place on two fronts: one, the robot KAMAZ, due to its smaller (compared to BELAZ) external dimension, is more manoeuvrable and can facilitate the logistics of closed industrial zones at manufactures of various types, two, in the long run, a train of KAMAZ robot towing trucks could serve for long-distance transportation, probably on a separate lane.”

The team is planning to finalise the project by September, it said.

VIST is also working on completing  its Intelligent Mine project – a complex solution for unmanned surface mining with application of self-driving vehicles. The company is planning to spend a material share of investment provided by ZYFRA to accelerate its R&D projects including self-driving vehicles, autonomous surface mining machines and appliances, broader IoT- and AI-based solutions application as well as predictive analytics, it said.