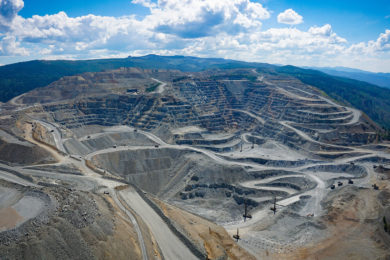 The Copper Mountain mine, located in Princeton, British Colombia, and owned/operated by Copper Mountain Mining Corporation, has been producing copper since 2011. In 2014, the mine desired to increase their production volume, and looked at two options that could potentially accomplish their goal: purchase a new haul truck, or optimising their existing fleet through the implementation of a fleet management system (FMS). After extensive research and evaluation, the operation decided to purchase Modular Mining’s DISPATCH FMS. The system improved the mine’s hourly production by nearly 4% and saved them more than US$4 million in avoided costs due to the purchase of a new truck.

Modular Mining told IM: “The value provided by the FMS became a springboard for Copper Mountain to invest in additional mine management solutions that would provide additional value across the mine. Over the next several years, Modular worked closely with Copper Mountain to execute numerous large-scale projects, establishing a mutual understanding of the mine’s specific goals and desired success metrics to be delivered in each case. Deployment for any single project was based around delivering value and was not considered ‘complete’ until the system was installed and calibrated, then validated and signed off as satisfying Copper Mountain’s expectations, based on these pre-determined success metrics.”

Today, the mine also leverages other technologies within Modular’s IntelliMine platform, including the MineCare Maintenance Management and ProVision Machine Guidance systems; together with the DISPATCH FMS, these technologies have helped Copper Mountain mine 190,000 t of material per day.

Copper Mountain presented their impressive results at the annual CIM convention in Vancouver this past May 2018. A common theme throughout the presentation was “you cannot improve what you do not measure” – this single idea helped strengthen the relationship between Copper Mountain and Modular Mining, as well as the productivity improvements they’ve experienced since.

Prior to implementing the DISPATCH system in 2014, Copper Mountain had little visibility into their operational processes. To gather comparative and baseline data, after installing the DISPATCH FMS, Modular disabled the system’s optimisation functionality. When this functionality is engaged, the DISPATCH system automatically assigns trucks and shovels via advanced algorithms in real time, considering such haulage-fleet-related factors as equipment size, shovel-to-truck matching, availability of equipment, changes to mine roads or topography, and on-the-spot events that take equipment down or affect equipment performance. Disengaged, the system “locks” specific trucks to specific shovels through manual dispatcher assignments at the start of a shift. Because status information is not continually updated, dispatchers may not be aware of changes in haul route conditions, equipment availability, or other factors affecting the viability of the earlier assignments. The mine ran the DISPATCH system “locked” for three months, after which the optimization functionality was engaged. The system then ran “unlocked” for another three-month period.

Using reasonable estimates of the mine’s performance prior to purchasing the DISPATCH system, Modular and Copper Mountain embarked on an ROI analysis to quantify the mine’s production increases as a result of the FMS capabilities. The analysis focused primarily on the amount of additional tonnage the mine could move if shovel hang and truck queue times decreased; these factors are vital to realising optimal production targets. Analysis of the baseline data considered key performance indicator (KPI) metrics in the areas of production (ie shovel hang time), maintenance (equipment availability), and operations (equipment utilisation).

As a truck-limited operation, Copper Mountain focused on maximising their productive truck time. With the optimisation module enabled, the mine was able to better allocate trucks and shovels, which helped reduce shovel hang time by 13% over the three-month period. This reduction in hang time represented a 9% reduction to the percentage of load cycle attributed to hang time, as well as a 4% reduction in queue time

Together, these improvements resulted in an hourly production increase of 4%, which equates to an annual production increase of just over 2 million additional tonnes, or the volume of material moved by an additional 1.04 haul trucks. By implementing the DISPATCH FMS and leveraging its optimisation capabilities, the mine realised a first-year cost savings of more than $4.2 million (the cost of a new haul truck); further savings will also be realised through avoided truck maintenance costs. Over the next year, the mine identified additional opportunities to improve productive truck time, including a reduction of the wait time at the primary crusher, which was reduced from ~350 truck hours prior to FMS implementation to 150 hours in 2017 with the same fleet and production goals. To further exemplify the mine’s performance improvements as a result of the DISPATCH FMS implementation, the mine planned for a three-minute delay per truck at the crusher; from December 2016 to December 2017, their actual wait time was reduced to below this three-minute threshold.

After the successes they experienced with the DISPATCH FMS, Copper Mountain expressed an interest in further potential improvements that could be attained. In an effort to prevent major component failures, extend component life, and improve equipment reliability, Copper Mountain and Modular Mining worked together to implement the MineCare Maintenance Management system. This collaboration enabled the mine to serve as the global test site for the latest generation of Modular’s maintenance technology, the MineCare 3 system, in 2016. For the first year, the system was installed on three of Copper Mountain’s haul trucks; the following year, it was expanded to their full haulage fleet of 24 trucks.

In addition to accomplishing the mine’s initial goals as stated above, Copper Mountain worked with Modular personnel to establish custom, user-defined alarms, allowing the mine to achieve value from other improvements, such as the reduction of both service brake applications and damage to struts and frames. These user-defined alarms helped track frame torque events and strut pressures; the mine then leveraged the MineCare system’s map view functionality to track and plot the locations in which these alarms occurred. This visibility provided valuable insight about necessary improvements to the mine’s haul roads. After improving the haul road conditions in the areas that were triggering the alarms, the mine’s frame torque events declined significantly.

By reducing the frame torque events in their haul trucks, Copper Mountain reduced the truck frame stress, which will help them further improve both costs and production. Following the test period, and satisfied by the value the system provided during that trial phase, Copper Mountain decided to invest in the MineCare 3 technology, which will help them move more towards a proactive maintenance approach that enables them to reduce their unplanned maintenance and increase their equipment longevity.

In early 2017, Copper Mountain chose to further expand their IntelliMine technology platform to include Modular’s ProVision Machine Guidance system for five drills. The system’s high-precision navigation capabilities, combined with intuitive guidance to the next hole and real-time progress information related to depth and angle, helped Copper Mountain increase their compliance to planned drill patterns by eliminating surveying of the drill hole locations and collars, and improving their drilling QA/QC to support further optimisation.

In May of 2018, Copper Mountain also implemented Modular’s ProVision Machine Guidance system for loading equipment to better identify their shovel advancement at the face. Similar to the ProVision system for drills, the high-precision accuracy afforded by the ProVision system for shovels eliminates the need for field surveyors. Prior to system implementation, the mine relied on surveyors to manually inspect progress dig lines and stake ore boundaries. After deployment, the shovel’s dig and progress line data points, as recorded by the ProVision system, were measured against the surveyed results, and showed an average accuracy of 14 cm with a 95% confidence level.

“This high level of confidence in the precise accuracy of their loading equipment’s dig line advancement enables Copper Mountain to make more accurate and up-to-date mine plans while simultaneously improving their floor control. The project deployment process included installation and configuration of the ProVision system, then thorough training about system capabilities and proper use for the mine’s shovel operators and dispatchers – all on time and to Copper Mountain’s expectations.”

Modular Mining stated: “Copper Mountain’s relationship with Modular Mining started from a single question around the return on investment comparison between purchasing a new haul truck or purchasing a fleet management system. This relationship and mutual collaboration has enabled both Modular Mining and Copper Mountain to grow and improve. Today, Copper Mountain’s fleet is equipped with all of the core components from Modular’s IntelliMine suite, including the DISPATCH FMS, MineCare Maintenance Management system, and ProVision Machine Guidance system. As Modular continues to expand their solutions and offerings, including in the safety awareness and operator-assisted technologies, this mutual collaboration will provide both companies with additional opportunities to further improve their productivity and operational processes. Close communication between Copper Mountain and Modular Mining enabled a team approach to successfully identify solutions that would help with the various challenges that Copper Mountain experienced. By focusing on value delivery as a vital component of deployment and sustainable value as a critical component of a successful solution, this collaboration will provide Copper Mountain with the continuous ability to extract even more value from their mine and Modular technologies.”