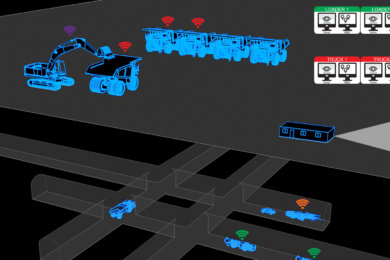 RCT has released the latest advancement to its ControlMaster® automation range in the form of Multiple Machine Control (MMC), which enables a single operator to control more than one mining machine at a time.

This entirely new operating system, also known as Control, is transforming the mining process in terms of productivity, efficiency and safety with a single operator able to remotely control more machines from the same operator station in a central location at a mine site, RCT said.

RCT’s Automation and Control Product Manager, Brendon Cullen, said: “It allows for an operator to send multiple machines to their destinations on ControlMaster Guidance Automation and concentrate on performing specific tasks with another machine.

“For example, the operator can supervise digging, dumping and loading functions before sending the machine to its destination on auto tramming and taking control of the next machine.

“The mining industry is striving to further streamline efficiencies and having one operator control multiple machines is allowing these efficiencies to be realised,” he said.

MMC meets a need in the industry as it helps clients to safeguard operators by removing them from the cab of mobile machines and, in some instances, from the hazards at a mine site. It also improves productivity and, in turn, profitability, according to RCT.

RCT said: “MMC can be implemented across surface and underground fleets and differs from other solutions available on the market today for a number of reasons including its usability and functionality.”

Cullen said: “The system can integrate into any site’s current operations and can be installed on any mobile machine, regardless of make or model. Being agnostic is a big advantage, as mine sites utilise more than one brand of mobile machines in their fleet.”

Another point of difference with MMC is there is no need for mine sites to upload mine maps before using the technology.

“This further ensures fast deployment between work areas as well as the opportunity to expand the system if and when required,” Cullen said.

While MMC operates on a digital network, RCT can provide technology—called RCT Bridge— that can interface with a mine site’s analogue communications network.

Cullen said: “The MMC solution can be operated locally at the work area, at a central location such as the office buildings on a mine site, or relocated to a central operating station location off site to a city (near or far).

“The system has the ability to change the way customers operate; some of the benefits associated with this change in mining practices include the possibility of introducing three eight-hour shifts from two 12-hour shifts.

“This provides better work/life balance for operators and, in the face of the labour shortages the industry is facing, the job role can be opened up to more people who weren’t able to travel to site to work in the field due to family commitments or perhaps even a disability.”

He concluded: “Moving operation centres from sites would also eliminate the need for lengthy and often costly inductions as well as the cost associated with transporting and housing operators on site.

MMC has already been deployed at several sites around the world, RCT said.