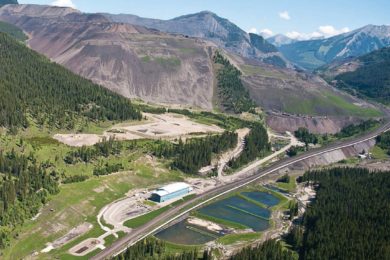 In 2018, the company successfully operated its first SRF project at Elkview, which has now been working for the past 12 months and “is demonstrating near-complete removal of nitrate and selenium from the feed water”, Teck reported in its 2018 financial results.

With the full-scale trial showing promising results, Teck is working to increase the capacity of the Elkview SRF to potentially reduce reliance on active water treatment, it said.

This approach has not yet received the necessary approvals and Teck said it continues to progress the construction of additional AWTFs to comply with the measures required by the Elk Valley Water Quality Plan, an area-based management plan approved in 2014 by the British Columbia Minister of Environment.

The plan establishes short-, medium- and long-term water quality targets for selenium, nitrate, sulphate and cadmium to protect the environment and human health, as well as a plan to manage calcite formation. In accordance with the plan, Teck has constructed and is operating the first AWTF at West Line Creek.

In the December quarter, Teck commissioned an additional treatment step to address an issue regarding selenium compounds in effluent from the West Line Creek AWTF. The facility is now operating as designed and the company has commenced construction on its next AWTF at Fording River Operations, which will use the same treatment process as the modified West Line Creek AWTF.

The company continued: “In our previous guidance, we estimated total capital spending for water treatment between 2018 and 2022 of C$850-900 million. We intend to complete construction of the Fording River South AWTF, currently under construction.

“If we are successful in permitting SRF projects to replace the Elkview AWTF and Fording River North AWTF, we estimate that total capital spending on water treatment during this period would reduce to C$600-650 million. If no reduction in AWTF capacity is permitted, overall capital in the same period would increase by approximately C$250 million over our previous guidance, as a result of engineering scope changes at the Elkview AWTF and an increased volume of water treated at Fording River North.”

Teck said it had presented regulators with evidence that SRFs are a viable technical alternative to active water treatment, and is working through a review process. “We expect that this process will result in a decision in the first half of 2019,” it said.

In the meantime, Teck continues to advance research and development, including the SRF technology.

“We estimate that over the longer term, SRFs will have capital and operating costs that are 20% and 50%, respectively, of AWTFs of similar capacity. If we are successful in replacing a substantial portion of active water treatment capacity with SRFs, we believe that our long-term operating costs associated with water treatment could be reduced substantially,” it said, adding that all of the foregoing estimates were “uncertain”.