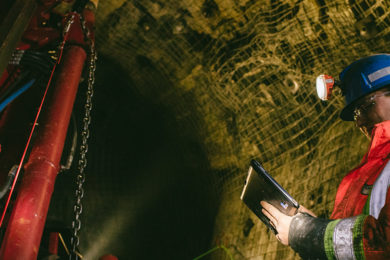 Following the successful deployment of the LTE network at LaRonde Zone 5, an LTE network was deployed at the LaRonde mine below level 269 in the fourth quarter of 2018. Extension of the network in the ramp area from level 269 to surface and at LaRonde 3 will take place throughout 2019. The LTE network will facilitate the integration of automation technologies currently being tested at LZ5 which are expected to allow the company to maintain similar historical productivity levels at LaRonde 3. Integration and pilot testing of automated mining equipment (two trucks and one scooptram) began in the fourth quarter of 2018 at LZ5 and will continue in 2019.

In the fourth quarter of 2018, mining continued at LZ5 with ore primarily processed from October to November and ore stockpiled at surface in December as the mill processed ore from Lapa. In its first year of operation, the mine achieved its designed production rate of 1,975 t per day with lower than expected dilution and slightly higher than expected mill recoveries. The company is currently evaluating opportunities to further enhance productivity. Under the current LZ5 mine plan, a total of approximately 350,000 ounces of gold are expected to be mined through 2026. The company is evaluating scenarios to integrate the additional mineral reserves in the down plunge of the LZ5 deposit into the mine plan along with the potential to process additional tonnage through the LaRonde Complex.The company is also evaluating the potential to extend operations at depth and along strike onto the Ellison property, which adjoins LZ5 to the west.

Overall, as the company mines deeper at LaRonde, the risks of more frequent and larger seismic events increases. As a result, the company is studying various design approaches to LaRonde 3. In addition, the company continues to adjust the mining methods, ground support and protocols to address seismic activity in the deeper portions of the mine.