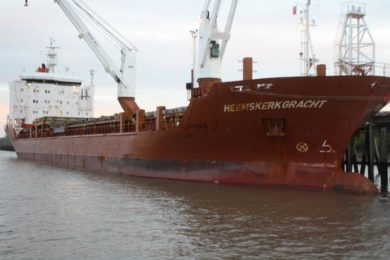 The MV Heemskerkgracht (pictured) departed with 7,735 t (wet) of concentrate on-board, with a preliminary invoice value of approximately A$ 8.6 million ($6.1 million), Panoramic reported.

Panoramic’s Managing Director, Peter Harold, said: “It is wonderful to see Savannah concentrate being shipped again from Wyndham. This is a significant milestone in the recommissioning of the mine and processing plant at Savannah and I would like to thank the team at Savannah for their efforts to get the project going again.”

Panoramic successfully commissioned the $65 million Savannah project in late 2004 and then, in 2005, purchased and restarted the Lanfranchi nickel project, near Kambalda. In its 2014 financial year, the company produced a record 22,256 t of contained nickel and produced 19,301 t contained nickel in the year after.

The Lanfranchi and Savannah projects were placed on care and maintenance in November 2015 and May 2016, respectively, pending a sustained recovery in the nickel price.

After delivering an updated feasibility study on Savannah in October 2017, securing an offtake customer and putting in place project financing in July 2018, the company made the decision to restart operations at Savannah. The Lanfranchi project was sold, in December 2018, for a total cash consideration of A$15.1 million, providing additional financial support for the reopening of the Savannah project.

Savannah is expected to ramp up to full production over 15 months to a forecast life of mine average annual production rate of 10,800 t of nickel, 6,100 t of copper and 800 t of cobalt metal contained in concentrate.