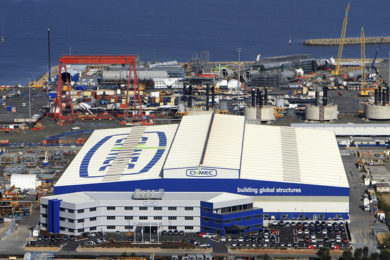 ASX-listed Civmec has announced the award of a contract from Albemarle for the delivery of a new lithium hydroxide plant to be built in Western Australia.

Albemarle’s new hydroxide production plant will be in the Kemerton Strategic Industrial Area, around 160 km south of Perth, near the port town of Bunbury. It will initially comprise of three production trains, each producing 20,000 t/y of hydroxide, with a potential further expansion to five trains and ultimate site production of 100,000 t/y by around 2025. Albemarle began earthworks earlier this year.

Civmec’s scope of work includes structural, mechanical and piping for the hydromet and final product, reagents and utilities for Trains 1, 2 and 3.

The company’s Henderson facility will be used to fabricate and pre-assemble selected components for the on-site plant erection, with fabrication commencing immediately. Site works, meanwhile, are expected from mid-2019 to March 2021.

At the peak of construction, there is expected to be some 300 personnel involved in the delivery of the current defined scope, providing significant opportunity for skilled people residing in the region, Civmec said.

Civmec’s CEO, Patrick Tallon, said: “We are delighted to have been selected by Albemarle as a significant construction partner for this exciting project. This two-year project is ideally suited to our operations, fabricating, modularising and site erecting steel work for this key Western Australian development.

“This project reflects the growing confidence in the Western Australia resource industry, highlighting a bright future for the coming years.”

The contract award takes the Civmec’s current order book to approximately A$758.5 million ($543 million), it said.