Goldcorp and Orica looking at further WebGen applications at Musselwhite 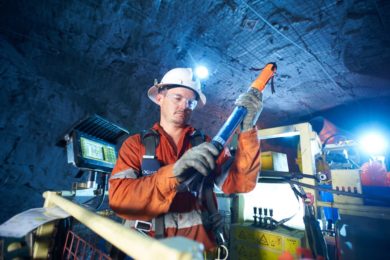 Following successful trials of Orica’s WebGen™ 100 at the Musselwhite gold mine, Goldcorp says it is looking at further drill and blast geometries and mining methods using the wireless blasting initiation system at the Ontario mine.

Goldcorp said these blasting tests underground at Musselwhite indicate “a decisive step on the path towards full automation of drill and blast operations in the future”.

In 2016, in collaboration with Orica, Musselwhite began testing WebGen, a system which fires primers through hundreds of metres of solid rock. “The wireless system has been designed to fully integrate with a mine’s existing blasting systems and improves safety by removing people from harm’s way,” Goldcorp said.

The project was recently announced as an award winner, which recognised the development of the temporary rib pillar (TRP) mining method using WebGen.

“The TRP is a revolutionary mining method that uses WebGen technology to extract ore pillars that previously could not be recovered in underground operations,” Goldcorp said. “Using this new method, the main ore of the panel can now be blasted and extracted while the TRP holds back the waste rock backfill. The inaccessible pillars can be blasted, delivering reduced dilution, increased truck fill factors and improved overall productivity.”

The system tested at Musselwhite enables groups of in-hole primers to be wirelessly initiated by a firing command that uses an ultra-low frequency magnetic induction wave to communicate through rock, water and air, according to Goldcorp. “This removes constraints often imposed by the requirement of a physical connection (wires) to each primer in a blast,” the company said.

The magnetic induction wave is transmitted by an antenna at around 1,800 hertz, and received by disposable receivers in each borehole, according to Goldcorp. Each 51 mm-diameter, 320 mm-long disposable receiver has a tri-axis antenna array to receive the signal, supporting any blasthole orientation.

Goldcorp said: “Following the blast plan, each disposable receiver is encoded with the Group ID for its blast, and each detonator with a delay time, just prior to being loaded into the blastholes. A standalone Code Management Computer (CMC) – a tablet wiped of other software – is uploaded with a CSV file from Orica’s blast design software. The CMC assigns the encrypted firing codes and delay timing into a preload blast file. A handheld encoder takes the data from the CMC and encodes each disposable receiver and detonator.”

Three separate codes make up the Group ID, and all three must be received from the transmitter to initiate a blast, according to Goldcorp. First, a wake-up code activates the appropriate disposable receiver from sleep mode. Next, the activated disposable receiver receives an arm code, which calibrates and synchronises the units. Finally, following the mine central blasting protocol, the fire signal is sent, firing each detonator according to its programmed delay time. Other disposable receivers, having not received their wake-up code, remain dormant in their blastholes, ready for subsequent blasts.

Following these tests, further drill and blast geometries and mining methods using WebGen are being explored at Musselwhite, Goldcorp said.

Musselwhite’s Chief Engineer, Billy Grace, said: “Since starting the TRP trials with WebGen in late 2016, our level of comfort with the technology has reached a point that discussing possible wireless applications is an integral part of our mine planning process. The entire team is excited by the possibilities that WebGen opened up, and the new opportunities they are allowing for us to increase our productivity and safety.”

At Orica’s 2018 AGM, Alberto Calderon, Managing Director and Chief Executive Officer at Orica, called WebGen “the most exciting development our industry has seen since bulk explosives in the 1960s”.