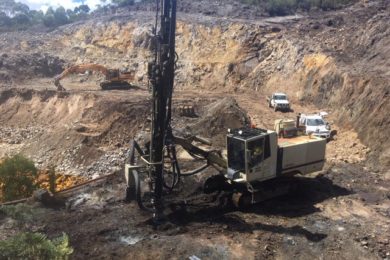 Aus Tin Mining says tin mining has commenced at its Granville East mine in Tasmania, Australia.

Run of mine material from the first mining block – estimated to total some 430 t – will be transported to the processing plant enabling plant feed to transition from low‐grade stockpiles to high‐grade mine material, Aus Tin said.

The first mining block is located at the southern end of the open pit and was extracted from the hangingwall shale that overlies the cassiterite-magnetite skarn, Aus Tin said.

Assay results from blasthole samples collected for grade control purposes have confirmed the high‐grade mineralisation at Granville East, Aus Tin said. These included intersections of 4 m at 6.56% Sn and 4 m at 4.34% Sn.

Aus Tin CEO, Peter Williams, said: “We are delighted to have achieved this major milestone as we transition to Level 2 operations and will now move to processing this material. We are particularly delighted with the grade of the first block, which across eight holes averaged 2.1% Sn and is more typical of underground mines.”

Aus Tin said it has been seeking to directly procure certain services contracted to its civil and mining contractor.

“To minimise further delays to the operations, the company has now assumed additional components of the contract, including blasting services and fuel supply,” Aus Tin said. “Furthermore, the company has removed the crushing component of the contract and is currently in discussions with alternative parties as well as examining capacity for utilising surplus equipment at the processing plant.”

Aus Tin shipped its first tin concentrate from Granville back in 2017, and has been working on developing a “Level 2” operation at East Granville at the same time.