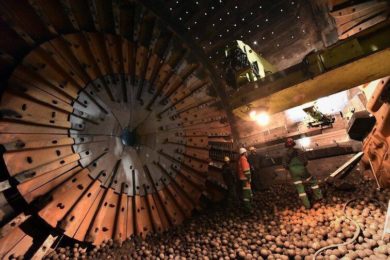 Norilsk Nickel has recently switched out the chrome and molybdenum alloy lining of a SAG mill at its Talnakh concentrator in Russia as the company looked to increase the life of these all-important wear parts.

Sever Minerals and Norilsknikelremont (a subsidiary of Norilsk) were contracted to complete the mill relining project, using liners supplied by Metso’s global team, which also used the OEM’s Megaliner™ concept.

The new lining is more durable, weighs less and ended up being safer to install than previous the previous lining, according to Norilsk.

A Norilsk spokesperson told IM that the mill lining was replaced with two elements, the Metso Poly-Met; a rubber-steel combination installed on the front-facing part of the mill; and the Metso Megaliner, which has large shell or head liners used to protect the drum.

The spokesperson added: “The cladding manufacturers guarantee that the mill can work for 5,600 hours uninterrupted (that is about eight months non-stop). The previous version required the SAG mill to be stopped for replacement every six months.”

By developing the technology, adopting better project management and using the specialised equipment, Norilsk said it was able to reduce the time taken to replace the mill lining by three days.

The Megaliner is, according to Metso, a new, innovative mill liner concept, dramatically improving worker safety and maximising mill availability. Each shell or head liner covers a large area, has few attachment components and an attachment system which gives a safer working environment for the installation crew, it said.

The weight of the mill lining also came down with the switch from pure metal to a metal-rubber compound, Norilsk said.

“The new mill liner weighs close to 130 t, which is 120 t less than the old mill liner. The average weight of one mill liner element is 1.8 t (elements have different configurations and respective mass),” the spokesperson said.

This reduced weight came with other benefits.

“Due to the lower weight of the capstan, the new mill liner is more wear resistant and better technologically-equipped to cope with an increased number of planned tasks,” the spokesperson explained.