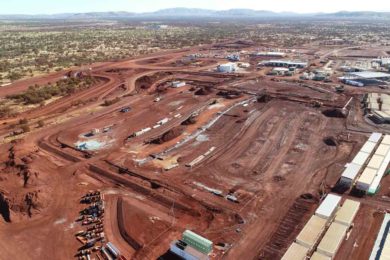 Civmec says it has signed a contract with BHP that will see the ASX-listed engineering company fabricate and modularise key components for the under-construction South Flank iron ore project, in the Pilbara of Western Australia.

The award of the South Flank module fabrication and assembly package #3 covers the supply and assembly of 23 fully-equipped ‘smart modules’, including the supply and installation of the required mechanical and electrical equipment up to no-load commissioning for each module, Civmec said. The scope comprises conveyor shuttle modules, sample station, pump skids, train loadout and feeder modules, all of which will be fabricated and assembled at Civmec’s facility in Henderson, Western Australia, before being transported to site for installation.

Work will commence immediately, with completion anticipated by mid-2020, according to Civmec.

Civmec’s Chief Executive Officer, Patrick Tallon, said: “We are extremely pleased to be given this opportunity to further support BHP in the delivery of what will ultimately become its flagship mine. The award of this scope of work complements the packages already in production for thyssenkrupp, in the supply, manufacture, trial assembly, surface treatment and pre-assembly of stackers, bogies and equalisers for the rail mounted machines for the South Flank project.”

When fully operational, South Flank will be one of the world’s largest iron ore operations integrating the latest advances in autonomous-ready fleets, digital connectivity and modular design, Civmec said.

BHP is targeting first ore extraction at the operation in 2021 and expects to ramp up to 80 Mt/y of output. This will replace production from the existing Yandi mine, which is reaching the end of its economic life. The company carried out the first blast at the project in September.

The combined value of these packages for South Flank is around A$48 million ($34 million).