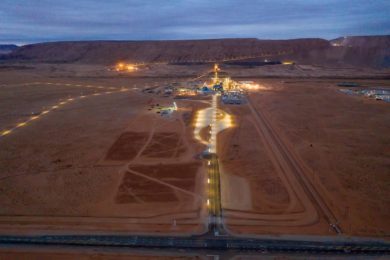 The Gamsberg zinc resource, though discovered more than 40 years ago, had been held undeveloped in the portfolios of various South Africa mining companies until Vedanta acquired it in 2011, as part of the Black Mountain Mining complex. Vedanta gave the project the go-ahead in 2014, and the first blast occurred in mid-2015, eight months later. Gamsberg has a reserve and resource of more than 214 Mt with a grade of 6-6.5% Zn and an estimated life of mine (LoM) of 30-plus years.

Phase 1 of Gamsberg, celebrated today, represents a $400 million investment by Vedanta in South Africa. It has a LoM of 13 years and will see 4 Mt/y of ore produced from the open pit and 250,000 t/y of concentrate from its concentrator plant.

Investigations into Phase 2 and 3 are underway and will see production of zinc-in-concentrate increase to 450,000 t/y, and in a modular fashion ultimately, to 600,000 t/y. It will reflect an additional investment of $350-$400 million.

Vedanta is simultaneously pursuing a feasibility study into the development and construction of a smelter-refinery complex, it said.

Vedanta’s CEO, Srinivasan Venkatakrishnan, said: “More than 90% of our $400 million investment at Gamsberg has been spent in South Africa. Our expenditure with local enterprises was around R77.5 million ($5.5 million) in 2018, while we invested more than R44.6 million in 2018 on training and social projects aimed at skills development, education, health, enterprise development and municipal infrastructure support. And this was before the mine had made a single cent.”

Delivering the keynote address, Cyril Ramaphosa, said: “The Vedanta Gamsberg project is an important step in our shared journey to revive our mining industry. It confirms our view that with an effective regulatory framework, improved collaboration between all stakeholders and sustained investment, mining has the potential to be a sunrise industry. South Africa has vast undeveloped mineral deposits that we have the opportunity to exploit for the benefit of all the people of this country.”

Gamsberg is one of the most digitally advanced greenfield mining projects in South Africa, according to Vedanta. Digitalisation at Gamsberg includes Smart Ore Movement, Spatial Risk Monitoring and Management and Collision Avoidance Systems.