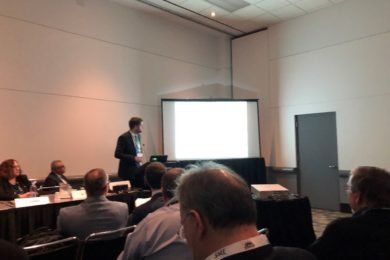 Herrenknecht expects to install one of its new boxhole backreaming machines in a mine in Asia later this year, one of the company’s Mining Project Managers, Alexander Frey, told attendees at an SME technical presentation, in Denver, Colorado, last week.

Looking to produce a system able to develop ore passes with simultaneous drilling and lining, the company has adapted boxhole boring machines it has been working on for the past nine years – which use an adapted form of the pipe jacking method – and come up with the boxhole backreaming machine. 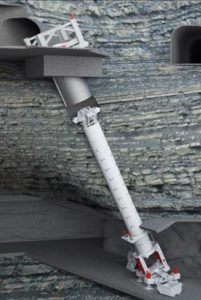 This new machine can stabilise the shaft with thrust pipes and a steel liner, which avoids collapses of the shaft or a rework, while reducing the amount of activities in the upper level during mine development.

Herrenknecht has already built one machine and tested it at a mine in the Black Forest of Germany, Frey said. This testing saw the company sink an ore pass with a 2.8 m diameter and 22 m length at an angle of 19°. During this test work in 150 MPa Gneiss rock, Herrenknecht achieved reaming rates of up to 1.3 m/h, Frey said. According to Frey, the machine, which is equipped with a cutterhead like those employed on raiseborers, can cut really hard rock.

He added that the machines would likely be used for safely and efficiently sinking ore passes with a maximum 70 m shaft length and 3 m diameter, but it could also find other industry applications.