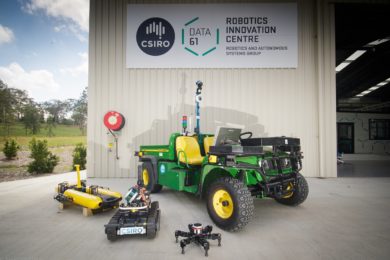 CSIRO’s Data61 has announced the opening of its new Robotics Innovation Centre in Queensland, a purpose-built research facility for robotics and autonomous systems, an industry set to be worth A$23 billion by 2025. CSIRO’s Data61 is one of the global leaders in the field, with capabilities ranging from legged robots and 3D mapping through to unmanned aerial vehicles (UAVs) and unmanned ground vehicles (UGVs).

Fred Pauling, Robotics and Autonomous Systems Group Leader at CSIRO’s Data61 said the 600-square-metre facility would enhance the group’s world-class research capabilities. “The new centre expands our research infrastructure to develop highly autonomous robotics systems that can interact safely and seamlessly with humans and other dynamic agents, in challenging indoor and outdoor environments,” Pauling said. “Our robots are already being used to safely inspect and create 3D maps of underground mines, monitor biodiversity in the Amazon Rainforest and navigate difficult terrain in emergency situations.”

One project being spearheaded by the centre is the testing of technology to rapidly map, navigate, and search underground environments as part of a three-year Subterranean Challenge funded by the US Defense Advanced Research Projects Agency (DARPA).

The centre houses the biggest motion capture system in the Southern Hemisphere, used to validate data collected by robotics systems. It also features a 13x5m pool for testing aquatic robots, a significant number of field-deployable UAVs and UGVs, legged robots, high-accuracy robot manipulators as well as sensors and telemetry systems.

“By creating a cohesive approach to robotics R&D through closer collaboration, supported by world-class facilities like the Robotics Innovation Centre, we can ensure Australia is well placed to benefit from Industry 4.0 and help to protect and accelerate our nation’s ongoing economic success.”