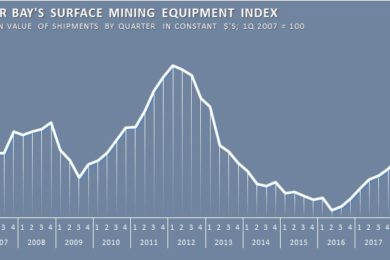 In it latest report covering Q4 2018, Parker Bay Company says the market for large-scale surface mining equipment continues the recovery/expansion that began in the second half of 2016, with the gains recorded in Q4 2018 nearly three times the level reached at the bottom of the four-year long contraction that ended in mid-2016. “On a year-over-year basis, deliveries of trucks, excavating/loading equipment and related mobile mining equipment recorded a 35% gain. Viewed in the context of quarterly growth, units shipped increased by just 1% over Q3 while value of these deliveries increase by close to 6%. When these quarterly figures are aggregated and compared to year-ago data, the annual gain is a more impressive. The annual aggregate value of these deliveries is estimated by Parker Bay to have increased from $5.7 billion during 2017 to $7.6 billion last year.” But as indicated in Parker Bay’s Surface Mining Equipment Index, the global market remains far below the 2012 peak when machine shipments were valued at more than $14 billion (at constant 2018 prices).

“The extent of the current expansion is best viewed in the context of the peak level of shipments (first half of 2012) which was followed by perhaps the most severe contraction the large surface mining markets have ever experienced.” The Index reached 175+ (Q1 2007 =100) in the first half of 2012 then fell to just 33 in Q2 2016 – a remarkable decline of more than 80%. “Since the nadir, shipments have now nearly tripled but have recovered to barely half of the last peak. This is evidence that there is ‘room to grow’ but achieving the 2012 level may be a very long-term proposition especially considering the amount of excess capacity that was brought about by those extraordinarily high deliveries.”

Manufacturers’ latest reports (often subject to minor revisions) indicate just a 1% increase in the number of machines delivered vs Q3 2018, but a more substantial 6% increase in the value of those shipments as mines collectively shifted purchases toward higher-value hydraulic shovels/excavators and (to a lesser extent) very high-priced electric/rope shovels. In sharp contrast, unit truck shipments declined by 7% while the value of these units declined by just 5% with a shift to larger size-classes accounting for the disparity. Gains were recorded in both the 218-255 t and 290 t classes but these were offset by sharp declines at 90-110 and 127-150 t. “As is often the case, quarter-to-quarter shifts my not represent longer-term trends, but the gains in 218-mt-plus units is expected to continue as many of the largest international miners step up capital expenditures as planned. Crawler and wheel loader shipment registered a sharp 24% increase in part due to the absence of ‘late-model’ dozers that were heretofore available in major used equipment marketplaces.”

The geographic distribution of Q4 shipments reflects strong demand from Australasia and Russia/CIS that has characterised the two-year recovery/expansion. Australasian mines accounted for the largest share of global shipments in Q4 (31%) but this represents a decline from the remarkably high level achieved in Q3 with demand moderating in Australia combined with a 15% decline from Indonesian mines and contractors. Shipments to the Russian market (from both indigenous and international sources) maintained the Q3 share of 22% and well above the region’s historical share and active population. Latin and North American markets continued to growth at faster rates after lagging significantly during earlier stages of the expansion. “The combined value of shipments to the Americas increased by more than $130 million and their combined share of global shipments reached 27%. A review of the mines in these regions indicates a combination of shipments to established mines and newer and expanding operations. Both Asian and African markets expanded in Q4 with the latter rivaling the far larger and more mature North American market.”

“While the shifts from one quarter to the next are of some consequence, they may not be long-lasting. Cumulative shipments since the current expansion cycle began two and a half years ago indicate substantial differences from both the last cycle and the latest shipments. During the nearly decade-long SuperCycle that ended in mid-2012, twelve countries accounted for just over 80% of all shipments led by Australia (18%), the U.S. (12%), Indonesia (11%), Russia (9%), Canada (8%), and Chile (8%). While these countries remain the largest destinations for shipments during the current expansion, the shifts are remarkable: all five of the largest national markets in the Americas have declined with their collective share just 16% vs 33% during the last expansion. The three largest Eastern Hemisphere markets – Russia, Indonesia and Australia accounting for fully half of all global shipments since mid-2016 vs. 38% during the SuperCycle. And Russia has replaced Australia as the largest national market.”

“In this context, the developments in 2018, especially Q4, may be reversals of developments that emerged during the initial stage of the current expansion phase. North and Latin American shipments appear to be accelerating while the remarkable growth rates in Russia and Indonesia have faltered or declined. Perhaps the very large capital expenditures by those countries’ largest mines have run their course. At the same time, purchases and shipment of equipment to some of the largest multinationals (Anglo, BHP, CODELCO, Glencore, Rio Tinto, Vale) may be resuming, and at accelerating rates. And these very large miners are more concentrated in the Americas and Australia. Rotation in mining sectors, both geographic and mineral, can be expected but the nature and degree of these shifts is difficult to predict.”

The distribution by mineral sectors shifted modestly away from coal mining which nevertheless maintained a near-50% share of all Q4 shipments. Within the three major metal sectors, gold mines resumed the leading share that it has maintained through much of the current recovery/expansion. This was offset by declining deliveries to copper mines. Collectively, copper/gold/iron mines accounted for 40% of Q4 deliveries vs 38% during Q3 and just 27% in Q2 2017. Assuming market conditions and prices for all three minerals remain well above the bottoms reached several years ago, demand from these sectors is expected to increase going forward.

“Shipments to oil sands mines remained well below the volumes recorded in 2017. While quarterly shipments vary greatly in this narrowly defined sector, annual deliveries in 2018 were barely half that of the previous year. This may well reverse in 2019 as large orders are already in place for ultra-class autonomous trucks with deliveries slated for 2019-2021. However, most of the very large electric/rope shovels utilised with these ultra-class trucks are not yet in need of replacement owing to their longer service lives.”

“Shipments to other mineral segments during the second half of 2018 tracked historical levels at 8% and equal to their share of the global population. However, despite high-profile news for certain minerals in this category (lithium, nickel, cobalt), Parker Bay does not envision equipment demand by any of these individual minerals to account for more than a percentage point or two of total shipments for the foreseeable future.”