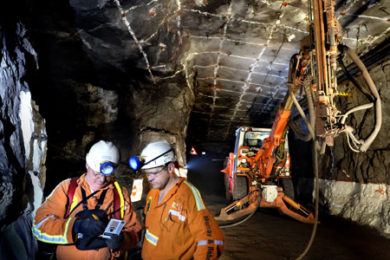 Murray & Roberts Cementation says it has been awarded a contract by Palabora Mining Co for a 1,200 m deep ventilation shaft at its copper complex in Phalaborwa, Limpopo Province, South Africa.

The shaft, with a lined diameter of 8.5 m, will reach a final blind sink depth of 1,190 m before a drop raise takes it to its final depth, according to Braam Blom, Project Executive at Murray & Roberts Cementation.

“The duration of this project is expected to be just over three years,” Blom said. “After mobilisation, site establishment and surface civils have been completed, we expect to conduct pre-sinking until the end of 2019, with the use of our special shaft sinking gantry to a shaft depth of 65 m.”

A surface headgear and winder installation will then be constructed from January to March 2020. This will facilitate the slow sink to 200 m and the main sink until February 2022. Canadian shutter and lining methods will be employed, the company said. The team is expected to conduct shaft stripping by mid-April 2022 and to dis-establish the site by the end of May 2022, it said.

“There will be no stations or other excavations required, so this will help keep the team in a sinking cycle and optimise production levels,” Blom said. “We will run full calendar operations with 12 hour shifts and cycles of five day shifts, five night shifts and five shifts off.”

A relatively small labour force of 123 people is planned for steady main sinking conditions, with some sub-contractors conducting surface piling and civil works for the winder, headgear and other site construction. Shaft drilling itself will be done with two twin-boom Komatsu shaft drill rigs, and mucking by a Komatsu excavator with close to 1 t of loading capacity.

Blom said ground conditions were expected to be a challenge in some areas, as profiled from the cover and core drilling “However, we have various ways of reducing the risk and downtime during these intersections – such as keeping the shaft lining as close as possible to the shaft bottom,” he said.

Palabora operates a large block cave copper mine and smelter complex employing around 2,200 people, according to the company’s website. It has developed a $410 million underground mine with a production capacity of 30,000 t/d of ore.