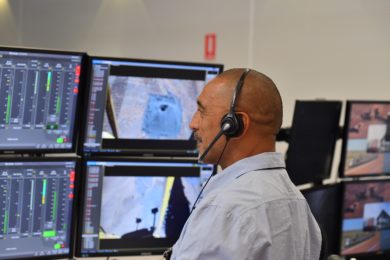 The autonomation of the project was completed in September 2018, with control expected to be fully centralised within Roy Hill’s Remote Operating Centre (ROC) located in Perth by May 2019. Since the rollout, the company’s productivity targets have been consistently met and exceeded. Autonomous drills are consistently achieving working hours of greater than 21 hours and drilled metres have increased by 14% from manned operations.

Removal of the variability associated with manned drilling has further allowed Roy Hill to analyse measurements gathered while drilling, gain greater understanding of the ore body and improve blasting processes. Rather than follow a traditional approach, Roy Hill opted to utilise a non-manufacturer, agnostic autonomous solution from FLANDERS Inc for the project. “This innovative partnership has proven to deliver not only enhanced performance improvements, but a significant cost advantage in light of the collaborative way the two parties approached risk-based decision making.”

Roy Hill’s Head of Mining, Ian Wallace, said “The move to autonomous drills has played a significant part in increasing our production drilling performance and safety at the mine. The introduction of the technology has reduced the variation in our daily results, enabling the teams to focus on operating disciplines, forward planning and further improvement opportunities.”

Also, there have been no job losses as a result of Roy Hill’s move to autonomous drills. Previously, drillers were operating one drill each, in an exposed, hot environment on the mine site. Now, the drillers have transitioned into office-based Drill Controller roles, operating up to four drills per person, using a control console and a screen from an air-conditioned office either at site or in the Perth ROC. By May 2019, all of these roles will be operating from the ROC in Perth, integrated as part of the larger demand chain.

Ian Wallace said: “Automation projects are always still predominately about people. This project has highlighted that by being open, transparent and committed to people’s development, advanced technology projects can be implemented in conjunction with enriching our people’s career paths. It’s all part of the Roy Hill culture – to be a high performing iron ore business where people contribute and realise their full potential.”