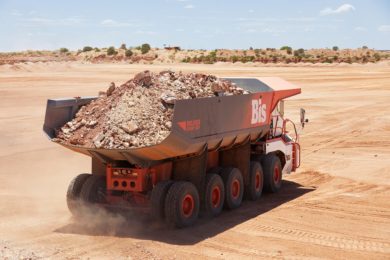 Known as Rexx, the dual powered 20-wheel dump truck has been designed with a range of features specifically incorporated to deliver savings to Bis customers, the company said. Rexx has more than four times the range of conventional dump trucks, outstanding manoeuvrability, operator comfort and maintainability plus on demand power that lowers fuel consumption, according to Bis.

Bis CEO Brad Rogers said the testing at Murrin Murrin mine has been carried out in `real-life’ operating conditions and the results to date indicated Rexx had the capacity to deliver up to a 30% reduction in operating costs compared with conventional dump trucks. These savings will be delivered to miners as part of Bis’ integrated haulage solution, it added.

Rogers said one area of the savings that could be passed on to Bis customers in haulage costs was average fuel use by Rexx, which was around half the fuel consumed by equivalent competing dump trucks.

“The fuel savings are a direct consequence of Rexx being designed with patented on-demand power that lowers fuel consumption,” the company said. “The vehicle has the capacity to carry enough fuel for at least two 12-h shifts, eliminating downtime needed for refuelling.”

Rogers said Rexx had been designed in-house by the Bis engineering team while the construction had used the talent of Western Australian tradespeople.“In Rexx we have a game changing work horse that showcases Australian innovation,” he said.

With an eye to industry trends, Rexx had also been designed and built to be easily retrofitted for autonomous operations with features including steering sensors, stability control sensors and a futuristic in-cab console, Rogers said. The console provides the operator with real-time data including pressure monitoring on all tyres and sensors for detecting bin tipping, engineering operation and payload.

Mining Manager at Murrin Murrin, David Ayres, said: “We were thrilled to be involved with Bis on this exciting project. Outside of autonomous systems, there haven’t been many major fundamental design changes in the rigid-frame off-highway game in a long time.

“The Bis design offers the ability to haul directly from pit-to-plant from a much longer distance, without the need for the re-handle step, which should save costs and reduce ore loss/dilution. Rexx solves a niche haul-distance equation,” he said.

Rexx has sparked significant interest from major miners both internationally and within Australia and a series of demonstrations are now being staged with interested customers, Bis said.