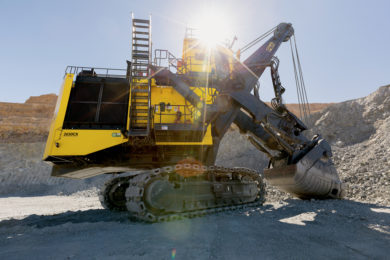 These are exciting times in the mining shovel market. With the first Komatsu Mining P&H 4800XPC model soon to be assembled at a large Canadian mining operation that cannot yet be named (but watch this space), there is also news on the Komatsu P&H 2650CX hybrid model. The first pilot machine saw evaluation trials at the ASARCO Mission copper mine in Arizona, and this machine (unit #1) has now been relocated to a surface mine in Colorado. Lucas Tolley, Product Manager – Hybrid Shovels at Komatsu Mining told IM that
the unit is being assembled now and will begin operation in April 2019. The new location allows Komatsu to validate machine performance in a colder climate and at high altitude.

But there is more news in that the Komatsu P&H 2650CX #2, the second unit, is scheduled for a mid-2020 build in the company’s Milwaukee manufacturing facility. Tolley said: “Although not officially determined, it will likely be a field-follow unit going to a different region and/or mining environment.” The hybrid’s shovel’s payload capacity of 59 t enables a four-pass match to 220 short ton haul trucks and will accommodate trucks ranging from 135 ton to 360 ton.

He added that by and large, the pilot machine has operated as it expected and the differences between unit #1 and unit #2 are minimal; however, there are differences between unit #1 today and its original design. “The majority of these changes focused on harmonising previously unlinked systems. This pilot unit has hundreds of strain gauges and transducers on board to evaluate structures, temperatures, pressures, speeds, torques, etc. Engineers have utilised this data and proactively made design updates. The undercarriage, bucket, hoist, hydraulics, and SR technology are some of the updated areas.” He adds: “In 2016, the P&H 2650CX was a pilot machine. Today, it is nearly a finished product.”

The concept for the 2650CX was first introduced at MINExpo 2012 as an alternative to 550-700 t hydraulic excavators with the possibility to reduce total cost of ownership by 10-15%. This cost advantage is achieved through a 25% reduction in fuel consumption, 5-10% reduction in maintenance and repair costs and a 1-3% increase in availability. These savings are enabled to a major extent by the innovative SR (Switched Reluctance) Hybrid Drive system, which was brought to the 2650CX from the P&H Generation 2 wheel loaders, which includes machines up to the massive L-2350 machine. It has an operating capacity of 72,574 kg, and can centre load haul trucks with payload ratings ranging from 320 to 400+ short tons.