Solar power up and floating at former coal mine in Anhui, China 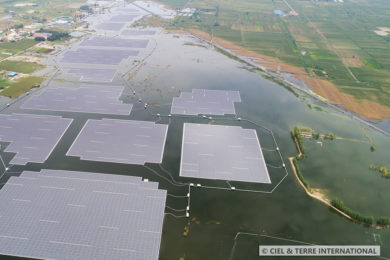 China state-owned developer CECEP has completed a 70 MWp floating solar plant on a former coal mining area, in Anhui Province, China, following tests and monitoring, according to the company that supplied the plant.

To connect the 70 MWp floating PV power generation project to the national grid, a brand new 18-km-long 110 V overhead line was built to optimise the transport of electricity.

Ciel & Terre said: “Behind the installation of this complex is the will to improve the energy structure of Anhui Province as well as the ecological environment quality of the Lianghuai mining subsidence area.

“In the meantime, the initiative enables the promotion of the development of the ‘floatovoltaic’ technology, which also preserves water bodies. It prevents them from algae proliferation and oxidation, and even conserves water sources by reducing evaporation.”

The floating solar plant covers an area of 1.4 km² and is expected to generate up to 77,693 MWh in its first year, according to Ciel & Terre. This represents the electricity consumption of some 20,910 households.

“Within 25 years, the solar farm should generate around 1.94 million MWh,” the company said, saying the project adds to another 32 MWp GCL floating PV plant it supplied in Anhui.

Headed by CECEP, the complex was built using the tried-and-tested Hydrelio® technology designed by Ciel & Terre.
Ciel & Terre said: “CECEP chose Ciel & Terre for this major project for three complementary main reasons: the 13-year experience of the company in the field, the broad portfolio of 140 projects worldwide and the characteristic reliability and bankability of the Hydrelio system.”

Central inverters integrating medium voltage transformers have been used on this project – they stand on the water and not on the banks – while concrete poles support the electrical installation.

The anchorage system was designed and installed under the supervision of Ciel & Terre China, a subsidiary of the French company. Overall, 1,500 helical anchors were used for the project and buried from 8-m to 15 m-depth to fit the configuration of the site.