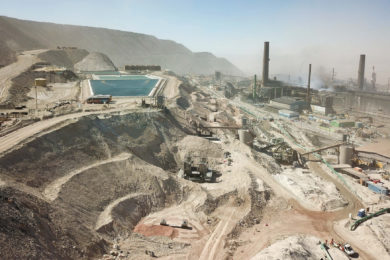 Codelco has terminated its contract with SNC-Lavalin following a dispute related to a copper project the engineering firm was working on for the mining company.

SNC-Lavalin, which confirmed the news in a press statement, said Codelco had also initiated a drawdown on its approximately $42 million in bank guarantees.

News of a problem with one of SNC-Lavalin’s mining and metallurgy contracts came to light earlier this year, when the Canada-based company said an unfavourable cost reforecast related to a project would affect its 2018 financial results.

The two parties were unable to agree on a way forward for the project and, following further discussions, agreed to settle the dispute through an accelerated arbitration process. SNC-Lavalin said at the time that it expected to make significant recoveries in the future, but it would in the meantime continue to work on the project, which it expected to complete by the end of the June quarter.

Codelco said the $260 million engineering, procurement and construction (EPC) contract for the building of two new acid plants at the Chuquicamata smelter, in Chile, had been terminated due to a serious breach in the contract milestones.

“Among the non-compliances, are the delay in payments to its subcontractors, delays in the execution of the project and problems in the quality of the works, among others,” Codelco said in a news release translated from Spanish.

SNC-Lavalin, which earlier this year stopped bidding on all future mining EPC projects, said it was “appalled and surprised” by the decision taken by Codelco.

“We had reached an agreement in good faith on February 1, 2019, regarding the full completion of the project and a process for a fast track dispute resolution of previously announced unresolved issues through accelerated arbitration.”

The company said as it was nearing the end of the project completion, Codelco’s actions would put the completion and commissioning date further at risk.

“We believe that this termination is unwarranted and in breach of good faith agreements reached by the parties. It should be noted that Codelco has reached this decision after SNC-Lavalin openly informed Codelco of the status of the execution of the works, as requested by Codelco, which showed delays caused by site conditions that were the responsibility of Codelco, and the poor and unjustified acts by the main construction subcontractors,” SNC-Lavalin said.

SNC-Lavalin said it was now demobilising the job site and assessing the legal and financial impact of Codelco’s decision and preparing the dispute resolution actions to “recover as much as possible of the previously announced losses that are due directly to our client and to poor sub-contractor performance”.